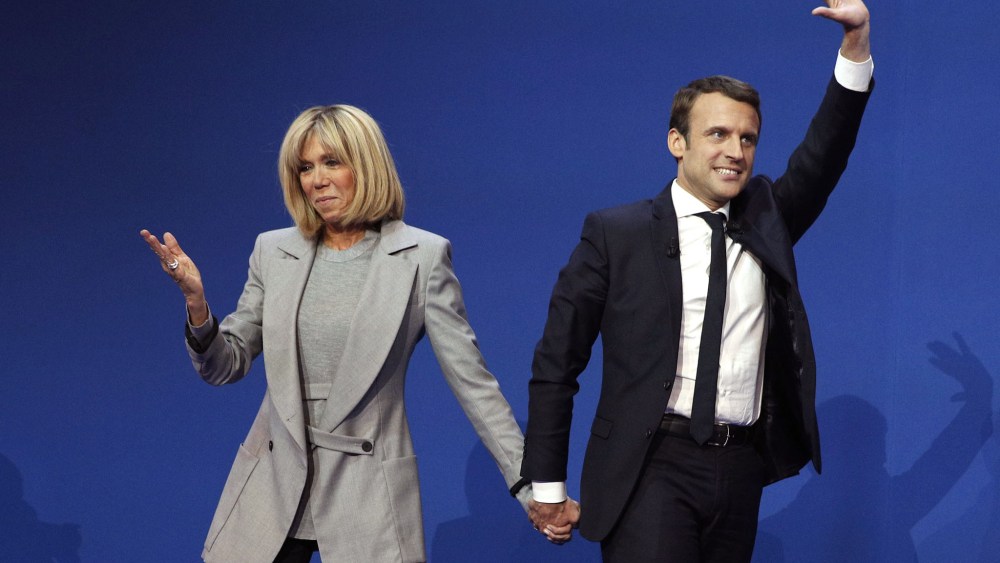 Brigitte Trogneux, a 64-year-old former French teacher with a blonde bob and a model figure, has stepped into the international spotlight following the lightning rise of her husband Emmanuel Macron, a 39-year-old former investment banker, to the French presidency.

The couple have graced countless French magazines in the last 12 months, including a carefully orchestrated Paris Match cover last summer that showed Trogneux flaunting her pin-thin physique in a one-piece swimsuit with a Hawaiian floral print.

Indeed, the two have become so inseparable in the public eye that when Macron appeared alone in front of the Louvre pyramid on Sunday night to celebrate his win, the crowd started chanting: “Brigitte, Brigitte!”

When the country’s new First Lady joined him, she was dressed in the same navy Louis Vuitton coat with a raised silver collar that she wore earlier that day to cast her vote — though she had traded her jeans for more sophisticated dark pants.

The coat has been one of her closet staples since she first wore it to Vuitton’s fall 2016 show more than a year ago, signaling her ongoing relationship with the label designed by Nicolas Ghesquière.

With her chic updo and dark eye makeup on Sunday night, Trogneux shaved years off her age and won plaudits from foreign newspapers, which rapturously compared her to Michelle Obama. Macron has indicated that unlike previous French first ladies, his wife will have an official role, though it won’t be paid.

His inauguration on Sunday will be the first real test for Trogneux, whose penchant for above-the-knee skirts and skinny pants has raised eyebrows in conservative political circles. Her choice of outfit will be read as an indicator of the tone of Macron’s five-year term.

“She will be watched as closely as, if not more than, Emmanuel Macron in terms of image,” said Elizabeth Pineau, coauthor with Gaëtane Morin of “The Political Wardrobe,” published by Éditions Robert Laffont, which examines the symbolic weight of clothes in the history of French politics.

Cécilia Sarkozy memorably wore an ivory duchess Prada dress to the inauguration of her then-husband, Nicolas Sarkozy, in 2007. “That set tongues wagging at the time because her outfit was not made in France, and at the same time she was very elegant — both things were duly noted,” said Pineau.

Valérie Trierweiler, the partner at the time of outgoing president François Hollande, pointedly paired an off-the-rack black dress from French brand Apostrophe with a white coat from Tara Jarmon. “She wanted to send a message of simplicity from the first day,” Pineau said.

Much has been made of the Macrons’ age gap and unconventional history. They met when he was a 15-year-old student and she a drama teacher at his school — married with three children, one of whom was in Macron’s class. Trogneux, known as Bibi to her friends, went on to marry Macron in 2007.

Candice Nedelec, coauthor with Caroline Derrien of “The Macrons,” published by Fayard, said Trogneux advises her husband on the content of his speeches and his body language during political rallies.

“He has said himself he wouldn’t be who he is without Brigitte. She has been by his side for 20 years and they have a very symbiotic relationship. They need to be together all the time,” she said. “She casts a well-meaning but critical eye over him. She is one of the few who tells him the truth.”

Though overseas media are hailing her as an icon of French style, Trogneux, who comes from a well-known family of chocolate makers in the northern town of Amiens, has been criticized at home for her perma-tan and penchant for ath-leisure, which jar with the elegantly understated look of the classic Parisienne.

She has never met a shade of blue she didn’t like, with her Vuitton outfits including a sky blue Sixties-style sleeveless minidress, which she wore on Bastille Day in 2015. Her hairstyle, meanwhile, has drawn comparisons with Seventies sex symbol Mireille Darc.

“Brigitte Macron’s image at home and abroad are very different,” said Pineau. “Her style is very provincial — not bourgeois, not Parisian — which has led some people to make fun of her in recent months as the country has gotten to know her. But she has stuck to her guns and she’s clearly into fashion.”

Trogneux has also been spotted in the front row at Dior, another brand within the LVMH Moët Hennessy Louis Vuitton fold, and Karl Lagerfeld is a prominent fan. “We are all so happy,” he told WWD on Sunday after Macron had been declared the victor. “I know him and his wife very well. They are great people.”

In an exclusive sketch for WWD, Lagerfeld suggested a sharp-shouldered jacket and transparent black chiffon skirt for Trogneux’s inaugural outfit. “I love her hair up,” he wrote alongside it.

Her slim silhouette makes her a natural fit for fashion brands. “She has the perfect body to be dressed in Jitrois, a size 36,” designer Jean-Claude Jitrois told WWD last year.

Nedelec noted that Trogneux works hard to maintain her figure. “She tries to ride a stationary bicycle for an hour every day. She watches her weight,” she said.

However, some have questioned her habit of wearing designer outfits in light of public outrage over conservative presidential candidate François Fillon accepting a gift of two suits from luxury tailor Arnys worth 13,000 euros, or $13,900, from a lawyer with close links to African leaders during the election campaign.

The news added to Fillon’s woes after he was charged with misuse of public funds for paying his wife hundreds of thousands of euros in taxpayer money for a fake job as a parliamentary assistant.

Nedelec raised the subject with Trogneux in a lengthy interview on the campaign trail. “She said that designers loaned her the clothes and that she always returns them, and that it was her way of honoring French design. But she added that if became damaging to her husband, she would stop wearing them,” she reported.

“But yes, she likes fashion and she has a pretty sharp fashion sense. Having said that, in everyday life, she wears jeans and not necessarily designer outfits. She leans more toward brands like Comptoir des Cotonniers, Maje and even Zara,” Nedelec added.

Trogneux’s fondness for casual looks has led to some missteps, namely her wearing a hooded sweatshirt and biker jacket to accompany Macron on a recent visit to Oradour-sur-Glane, site of the Nazi massacre of 642 villagers during World War II.

“It really wasn’t appropriate. I found it very surprising,” said Pineau. “It’s the kind of mistake she can’t afford to make once she is first lady. Having said that, I think she is perfectly aware of all this. I think she notices everything. It’s well-known that she pays close attention to what Emmanuel Macron wears.”

Once Macron is in power, Trogneux will have to walk a fine line between representing French elegance — a role that all the country’s former first ladies have taken on with varying degrees of enthusiasm — and striking the right note with French voters, especially ahead of legislative elections in June.

“French people love to be critical, but on top of that, it’s a particularly sensitive time for the country because of the moral, financial, economic and political crisis it is going through,” said Pineau. “She is walking on eggshells. Every euro of public money spent is being put under the microscope.”

Trogneux has expressed admiration for the discretion and poise of Carla Bruni-Sarkozy, who stepped into the role after marrying Sarkozy while he was in office. With her teaching experience, the new first lady is expected to inform her husband’s education policy, and also wants to help people with disabilities and autism, Nedelec said.

“She is going to tread lightly, because she is well aware that she will be scrutinized and that her every move will be commented,” she concluded.