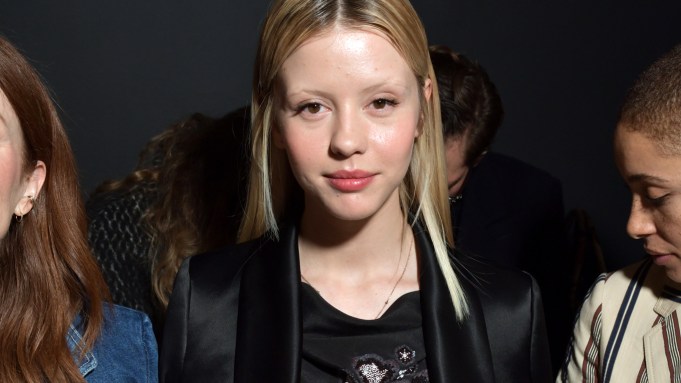 Sitting in the front row at Tory Burch’s runway show at Sotheby’s Sunday morning were artists Sheree Hovsepian, Rashid Johnson and Francesca DiMattio — whose sculptures were on display throughout the space as models walked by — and seated next to the artistic trio were Lucy Liu, Julianne Moore, Mia Goth, Bel Powley and Adwoa Aboah. Two members of the cast from “Cheer” were also at the show, marking a continuation of their fashion week tour.

“It’s my first time at Tory Burch,” said Powley, who stars in Judd Apatow’s upcoming film “The King of Staten Island,” “so I’m really excited to be here, experience the new collection.”

“I think her clothes are beautiful,” said Goth. “Whenever you have the chance to wear something from Tory Burch, she makes you feel very feminine and so when I had the opportunity to come [to the show] I was really excited to come and watch it.”

The British actress is headed to Los Angeles soon for the premiere of the Jane Austen comedy-drama “Emma,” which comes out in two weeks, and is figuring out her next project (“I can’t talk about them”); in December she wrapped filming for “May Day” with first time feature director Karen Cinorre.

For tonight’s Academy Awards ceremony, she’ll be rooting for a few fan favorites.