Aerin Lauder and Vogue hosted a dinner for Michael Kors at the new eatery Perry Street. 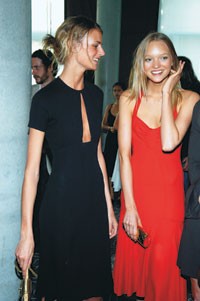 NEW YORK — The fashion set may have been tired from the CFDA Awards, MoMA’s Party in the Garden and a slew of other events last week, but that didn’t mean they couldn’t muster their energy for one last fete. Renee Rockefeller, Lauren duPont, Marisa Noel Brown, Fabiola Beracasa and Donald and Melania Trump headed downtown to a dinner for Michael Kors hosted by Aerin Lauder and Vogue at Jean-Georges Vongerichten‘s new restaurant, Perry Street.

“I live right upstairs,” explained Vongerichten of the eatery nestled at the bottom of the Richard Meier building at 176 Perry. “So it’s very convenient.”

As the crowd filed in to the minimalist space kvetching about the heat outside, they were met with frigid air conditioning and waiters proffering chilled champagne. The summer weather prompted revelers to trot out flirty dresses and tunics over jeans, and while most of the ladies in attendance sported bright Michael Kors spring and resort looks, it was Andre Leon Talley who stole the show when he wafted in in a billowing cheetah-print caftan.

Fellow restaurateur John McDonald gave Karolina Kurkova a tour of the spotless kitchen. Later, she and Kors checked out a photo booth replete with the designer’s line of sunglasses hauled in specifically for the event. As the cocktail hour wound down, the lot of famished guests sat down at the chicly minimalist booths to sample Vongerichten’s savory eats such as Japanese snapper sashimi, steamed black sea bass and tasty filet mignon.

“This is my idea of a perfect evening,” gushed Kors. “Downtown, by the water and just friends.”