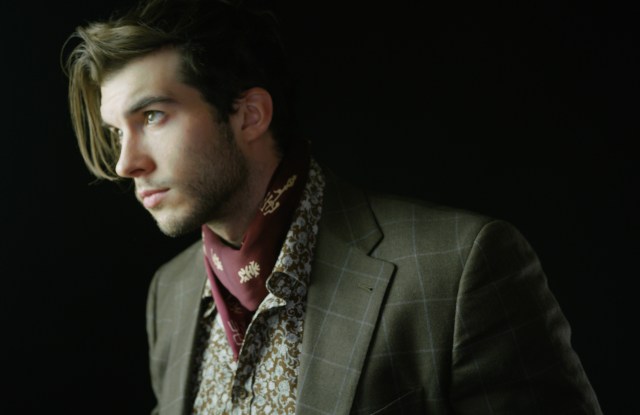 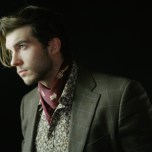 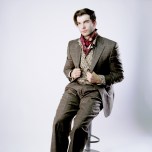 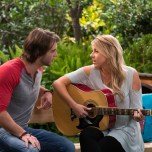 How does a non-Tanner book a stay at the Tanners’ famous San Francisco town house? It’s a question that remains to be answered, but parking your RV on the lawn à la Jimmy Gibbler is worth a shot.

Gibbler is the newest character to appear in the upcoming season of “Fuller House,” Netflix’s nostalgia-driven reboot of the popular Eighties and Nineties sitcom, “Full House.” Gibbler is a traveling photographer — hence the RV — who is the younger brother of Kimmy — hence the last name. He’s played by Adam Hagenbuch.

A native of Dallas, Hagenbuch currently resides in Los Angeles. He got into acting at the suggestion of his mother after realizing that sports — especially football, which he calls “the state bird in Texas” — weren’t for him. “[My mom] popped me in this little acting class when I was about eight,” he says. “I was the only boy in the class and man, I loved it. It was with this nutty woman. She was just crazy and she was like ‘You can do whatever you want. It’s all about expressing yourself and feeling things.’ I was an emotional little kid, so I loved that. I loved being able to fly off the handle and say whatever I wanted to.” Hagenbuch’s classmates eventually gave the metier up, but he continued to pursue acting throughout middle school and high school, landing roles in school plays and trying his hand at improv.

Unaware that he could go to college specifically for acting, Hagenbuch thought that if he were to be accepted into a film school, he could convince his professors that he was an actor. That plan failed, but after auditioning at the Chicago Unifieds, Hagenbuch did get accepted into “20 schools or something.” He set his sights on Carnegie Mellon University and headed to Pittsburgh. There, he landed a part in 2012’s “The Perks of Being a Wallflower.”

So how does a 25-year-old who grew up on cartoons land a role on the reboot of one of the most beloved sitcoms of all time? “I’m still asking myself that question,” Hagenbuch says.

As many opportunities do, his started with a call. It was a Monday at 10 a.m. and Hagenbuch was asked to audition for a part two hours later. “Very unorthodox, a same-day audition with only two hours to prepare,” he says. “It was something like 10 or 12 pages of very fast dialogue, back and forth, boom, boom, boom, boom.” Despite the challenge, he followed through with the audition and was met with good news. “I have no idea what they saw in me, but clearly it was something because the next day, I was on set,” he says.

“Full House” fanatics might have been surprised to learn that Kimmy Gibbler, played by Andrea Barber, had a younger brother. But Hagenbuch insists that Kimmy dropped hints about her family in the original series.

“My working theory is that Jimmy existed, he’d always been there, but he was probably this obnoxious little dweeb of a brother that Kimmy didn’t really feel like bringing up or talking about,” he reasons. “She has nine brothers and sisters, or at least four, she’s got three sisters for sure ’cause those were definitely in there in the first [series], plus Garth. And then there’s this younger brother and he might be younger than all of them and she just forgets about him. We know she’s an airhead. Or she’s just tired of dealing with him and that’s why she’s always over with DJ and Stephanie all the time — she doesn’t want to deal with her bratty little brother and her four brothers and sisters. That’s what I’m going with.”

The first season of “Fuller House” felt like the family reunion that it was. It doesn’t take an insider to know that the cast members — minus the Olsen twins — are extremely tight-knit. Hagenbuch described working with them as “going to a Thanksgiving dinner with your new spouse’s family. They’re so sweet, they’re so welcoming and they will try their best to include you, but they have 20 or 30 years of history together that you’re barely just getting snippets of through these inside jokes and gags.”

Though they’re close, the legacy cast is not exclusive. “The only thing excluding me from being more a part of it is I haven’t binge-watched all of ‘Full House,’” Hagenbuch says.

True to Gibbler form, Jimmy will inevitably overstay his welcome on this season of “Fuller House.” He’ll also begin a romance with Stephanie Tanner, played by Jodie Sweetin.

“A Gibbler and a Tanner together would have been outlandish [in the original series], and of course it immediately creates this component with Kimmy, who is always on the out, but wishes she were in more,” Hagenbuch says. He adds that there are “so many cameos” this season, though he’s unable to name who. In total, Jimmy appears in about seven episodes and Hagenbuch insists that he’ll be back for more.

The second season of “Fuller House” hits Netflix on Dec. 9.