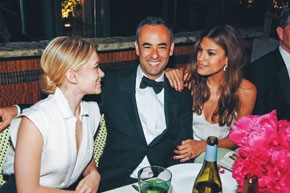 Talk about a tough crowd.

Not even industry jester Simon Doonan, who presented the International Award to Dries Van Noten, could get much of a laugh at Monday’s CFDA Fashion Awards at the New York Public Library. His ribbing of André Leon Talley for “renting” a turban and diamond pin fell completely flat, and emcee Fran Lebowitz’s wit was so dry that it too elicited little response — though there were some chuckles when she needled the fashion industry’s “obsession with the middle-aged….If you see a young, beautiful person, be nice to them,” she pleaded. Tina Fey and Amy Poehler, two of New York’s funniest women, didn’t fare much better with their accessories routine. Fey’s “Spanx” weren’t accessories, Poehler said, but “undersadness.” In the end, it was up to Board of Director’s Special Tribute recipient Mayor Michael Bloomberg — not particularly known for his comedic chops — to lighten up the crowd when he sheepishly apologized for his tux: “My skinny jeans are at the cleaners, and my gladiator sandals are being resoled,” he explained.

Perhaps the typically cool reception to shtick is why fewer A-list celebrities are attending as presenters: The word on the street about this hard-to-please bunch must have spread.

Not even crowd favorite, the much imitated Eugenia Sheppard Award winner Candy Pratts Price, took the opportunity to cut up on stage. Most commonly, the winners thanked the CFDA and Anna Wintour, which just might be leading the factions from Elle, Harper’s Bazaar and In Style to contemplate some form of sedition.

As for the videos, they’re getting slicker every year, with even a few name directors like Mike Figgis and Douglas Keeve (and Diane von Furstenberg for Van Noten). They had their amusing moments — Tom Ford’s faux move on “shrink” Gabriel Byrne treading the line between funny and peculiar or Pratts Price’s voiced-over Kate Moss — but the onscreen efforts suffered from the same cool reception that greeted the onstage players.

All of this isn’t to say that the night didn’t have its share of high points — led by the punctual start and fast pace of the awards ceremony, which took on a theater-style format with refreshingly brief acceptance speeches, and von Furstenberg’s opening of the evening with poignant words about Yves Saint Laurent. “He was a visionary who brought art into fashion and fashion into art,” the CFDA president said. “He always teased that he would have liked to be Matisse, but I think Matisse would have liked to be Yves Saint Laurent.”

And while the celebs weren’t quite Costume Institute caliber (remember George, Julia, JLo, Tom and Katie?), there was nevertheless plenty of eye candy, from Victoria Beckham to Maggie Gyllenhaal, Ashley Olsen, Eva Mendes and Kim Cattrall, who seems to find it increasingly difficult to differentiate herself from her fictional character Samantha Jones, as she purred her way through her presentation of the men’s awards. This being an industry event, designers were in abundance: Ralph Lauren, Donna Karan, Calvin Klein, Vera Wang, Michael Kors and Marc Jacobs. Womenswear Designer of the Year winner Francisco Costa brought Mendes for the second year in a row. “It’s quite romantic,” Mendes said of her and Costa’s pre-party routine. “He always picks me up and we have a cigarette on the way.”

Mendes was responsible for one of the evening’s more awkward moments. With Gyllenhaal representing nominee Proenza Schouler, Beckham in nominee Marc Jacobs and Mendes in Calvin Klein Collection, the trio were on stage to present the award for Womenswear Designer of the Year to Costa. Beckham opened the envelope and Mendes, seeing Costa’s name, gleefully shrieked and snatched the envelope from the Spice Girl’s hands, leaving Posh and Gyllenhaal momentarily stunned. Costa handled the moment with his signature grace, dedicating his award to Klein and Barry Schwartz. And even Klein seems to have mended some fences between him and his successor. “It’s great for Francisco, and well-deserved,” he said of Costa’s win.

Guests walked from the library to the Bryant Park Grill for the seated dinner at long family-style tables among charming bouquets of peonies and sweet peas. It all made for an intimate affair — so much so that one wing had guests and waiters maneuvering the tightly packed tables, while the other had them praying for additional air-conditioning. The cooks’ interminable pace left the industry that supposedly doesn’t eat ravenous, and had von Furstenberg, Steven Kolb, and KCD’s Julie Mannion in the kitchen hastening speed. Not in time for some. “I’m leaving; I’m hungry,” said Jacobs, whose entire table, including Beckham and Lil’ Kim, cleared before the main course, prompting Posh’s BFF Naomi Campbell to do the same. Others stayed till the end, table hopping the night away. “It felt like a family,” von Furstenberg said. “It really felt like we were a community, and that is nice because we all need each other.”

KURKOVA BY KRISTEN SOMODY WAHLEN; ALL OTHERS BY STEVE EICHNER