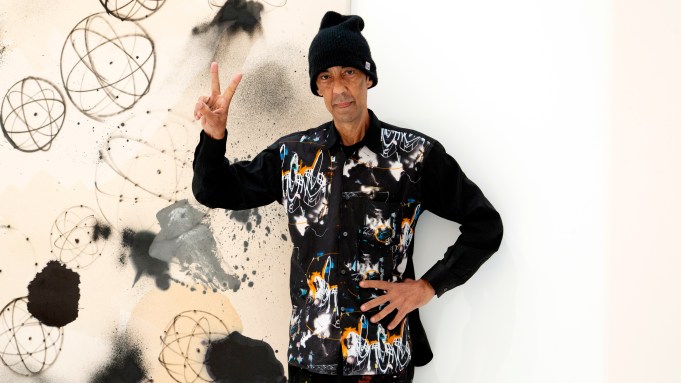 The artist known as Futura — to close friends, he’s Lenny — estimates that he visited around 17 countries last year. This year looks much different; he’s spent the majority of 2020 at home in New York.

He’s discovered that there’s plenty upside to staying close to home, including “Futura 2020,” his first solo gallery show in New York in 30 years, and the release of his eponymously titled monograph with Rizzoli.

On a recent rainy afternoon, Futura walks into the Eric Firestone Gallery in NoHo with a small cardboard box nestled in the crook of his arm. Inside are six cans of spray paint and a blue 3-D-printed version of his signature, which he’s been using as a reverse stencil to sign work. Despite being grounded by the pandemic, the artist is still busy as ever; he’s in the midst of working on a project with the Noguchi museum, painting lamps for an exclusive exhibition (hence the box of paint).

Paintings featuring Futura’s lexicon — atom molecules, gears, his robotic character Pointman — hang on the fresh white walls of the gallery’s new location. A copy of the artist’s Rizzoli tome is set on the wooden bench in the middle of the gallery floor, which he flips open to show his all-time favorite work, “The Good, the Bad and the Ugly,” which Rei Kawakubo reworked into the shirt that he’s wearing, part of his ongoing collaboration with Commes des Garçons. Futura also dons a blue surgical mask and blue beanie, adorned with a pin that the erstwhile postal worker designed in support of the U.S. Postal Service.

Before discussing any of his recent projects, Futura mulls the moment at length from the gallery’s lower level. The world is in chaos and the publication date of his book, four years in the making, falls on Election Day. It’s not a time to be boastful, even though his career seems on an ever-upward trajectory.

It’s been difficult for him to equate the collective reality around him with his personal reality. “At a time like this I’d rather be under the radar, and unfortunately that’s not where I find myself,” he says. “I can’t start telling you about how great my work is without first having a conversation about what really matters for all of us.”

Futura routinely returns to the idea of perspective. Things are bad, but they could be worse; he’s seen worse. When he was 19, the young artist traded New York and the early graffiti scene of tagging subway trains for the military, serving in the Navy during the Vietnam War.

“To have had my experience and come back like — wow, we do live in a [country] that’s pretty free. If you work toward a goal in [America] you might achieve it,” he says. “I’m blessed that everything has conspired to happen for me in this way.”

In the gallery’s lower level, the artist considers a triptych hanging above a long wooden table. One of the works — “this piece of paper” — is worth more than the salary his father made annually in the Sixties. Futura knows he’s fortunate to be where he is, and believes in karma and paying it forward.

“I always have a plan, because I never had anything,” he says. For a long time, his focus was on generating enough income to support his family. His daughter and son — the photographer 13th Witness — are now in their 30s. “I always had a plan to save myself, and at a certain point I used to say, well I can paint myself out of trouble.…I always knew that was my out if things ever got bad, I could be like, all right Lenny, draw.”

Futura is an alumni of the early class of New York graffiti writers, and one of the best-known writers to parlay tagging as a teen to a multidecade fine art career marked by high-profile collaborations. There was his early Eighties collaboration touring and painting sets live with The Clash, and early foray into streetwear in the Nineties — inspired, in part, by the emergence of brands like Stüssy, whose logo riffs on graffiti style.

“In 1990 when we were like, oh hey, maybe we can make clothing and be an independent graphics brand, Shawn [Stussy] was a big inspiration for us trying to even imagine something that we created becoming a T-shirt or a hat or hoodie or jacket,” says Futura, who relaunched his early Aughts Futura Laboratories clothing line last year in collaboration with Dover Street Market. He’s continued to work with CDG, recently painting a mural outside its Chelsea boutique to mark his collaboration with Comme des Garçons Shirt, which incorporates his fine art prints.

He’s worked on collaborations that range from mass market to ultra luxury and in between: in just the last few years, a T-shirt collection with Uniqlo, a capsule collection with the New York Mets, a BMW M2 Edition car, a Star Wars Funko Pop figurine, a Nike shoe in collaboration with Virgil Abloh’s Off-White, and — in a nod to his early days — a set that he spray-painted live in January 2019 during a Louis Vuitton men’s wear show, again with Abloh.

Although busier than ever, Futura hasn’t had a true solo gallery show in New York — his hometown — in decades. “The last 10 years, I’ve been floating around doing everything else,” he says, adding that he’s excited for his local fans to visit his work in (socially distanced) person.

Futura turns 65 this month, and numbers hold great significance for him. There’s 20: it’s been 20 years since he dropped the 2000 from his original nom de plume, Futura 2000. And, of course, there are two 20s in 2020, which add up to 40 — his gallery show is located at 40 Great Jones. It’s been 40 years since he painted “Break,” the subway train mural that declared his abstract graffiti style and set him apart from the other graffiti writers of the era.

And 40 has its own distinct power; Futura notes that it marks a turning point of a younger generation — inspired by the graffiti and streetwear pioneers — being able to exert influence from within large institutions, whether museums or fashion houses like Louis Vuitton. “You can use Virgil [Abloh] as this example of a demographic number that’s quite powerful in today’s society,” he says, adding that the designer turned 40 this year. “People in their 40s are in the position in those institutions [museums, companies] to make decisions; it’s their time.”

Chalk it up to numerology, or call it work ethic; Futura’s appeal spans generations.

“When you see an artist in his mid-60s but a generation half his age is focused on his work, it’s compelling,” says the gallerist Eric Firestone, who met Futura a decade ago when curating a show of boneyard airplane nose cones in East Hampton with Carlo McCormick (who penned the intro for the Rizzoli book). Futura painted the cockpit of an F-101 Voodoo, which was the centerpiece of the show’s afterparty; Firestone likens the artist to a famous athlete. “He brings a crowd.”

“I appreciate the respect of my peers,” says Futura. “Because that’s really what I got into this whole thing for — I just want to be me, amongst us. But if somehow by being me amongst us I get your respect: wow.”

Some of those friends appear in the archival photographs included in his book, as do influential artist friends who have since passed away, including Dondi, Phase2, Stay High 149 and Keith Haring. The book is structured in reverse chronological order, with his most recent paintings and collaborations in the front and archival work and photographs towards the back. Essays from friends like Jeffrey Deitch, Takashi Murakami, Nigo, and Quiñones, who drew connections between Futura’s military experience and approach to art, are interspersed throughout.

While Futura’s “Break” train doesn’t appear in the book, there are images of his web site circa 1996, which he views in a similar vein. “That was the second time I felt like I had taken something and made it my own. Even that web site was a bit of an abstraction,” he says. Futura glances at one of his more recent paintings stretching across one wall of the gallery’s lower level, which places his characters within the world of his colorful abstraction, marking a new development for the artist.  “The other day when this was being painted down the street, my friend came down the block and said, yo — this is ‘Break’ number three.”

Futura has started to consider his own legacy, and references the generosity of Haring as a guide. Haring purposefully put away work for the children of his friends while he was dying; Futura’s son, very young at the time, was given three paintings, a gesture that has had a lasting effect.

Kenny Scharf Has Many Faces