Her hit single, "I Hope," is approaching the top 10 on the charts.

Gabby Barrett has compiled quite a résumé — and it was all before she turned 20 the first week of March.

Her debut single, “I Hope,” is currently number six on Billboard’s Hot Country Songs chart and has already led to more than 200 million on-demand streams. The song is a catchy breakup tune in which she wishes her ex gets the same treatment from his new love that he gave her — “I hope she cheats, like you did on me.” It ranked as Apple’s highest streaming song by a female country artist in 2019 and led to her being named to Radio Disney’s Next Big Thing and CMT’s Next Women of Country.

The accolades follow a successful stint on “American Idol” in 2018, where she came in third, which led to a number of life-changing experiences, including meeting her now-husband Cade Foehner, who had also appeared on the hit show.

But perhaps the biggest honor so far came at the end of February when Barrett was nominated as a New Female Artist of the Year by the Academy of Country Music. The awards were postponed from early April and will now be handed out in September.

“I knew I was in the final countdowns for it, but didn’t know if it was official yet,” she says. “So it was a good start to the day because this is my first real nomination for anything.”

Barrett, who was born and raised in Pittsburgh, has been performing since she was a child. She did her first show when she was 11 and realized then that she’d found her place in the world. “Entertaining is my favorite thing,” she said. “I know it’s cliché, but after the first show, I knew I liked singing, being on stage, making people happy. It just felt natural.”

She was discovered by a producer for “American Idol” during one of her performances and jumped at the chance to try her hand on the national stage. She was 17.

“I learned a lot,” she says. “It was very challenging in areas I wasn’t expecting. You watch the show and you see people performing on the stage and you think, ‘That’s easy, I can go and sing a cover song because that’s all I’ve done for the past six years.’ But I was hit with some more challenges but I think those six years before ‘Idol’ really prepared me for the process and I’m very grateful for that. And it [launched my] career, so it was great.”

Barrett, who says “I Hope” was inspired by a bad relationship she’d had in high school, wrote the song with Zachary Kale and Jon Nite and it was released independently before she had a record deal. “Within the first 24 hours, it shot to 14 on iTunes and it just hit number one on iTunes recently,” she says. It also led to a contract with Warner Music Nashville.

But Barrett admits she wasn’t sure the song would connect with listeners. “I’m not somebody who can tell if the song is good enough to be pushed until I hear what it sounds like after all the bells and whistles are put on it,” she says. “But what got me excited is that when I was leaving the writing room, Jon Nite said to me, ‘I literally think this could be the biggest song of my career.’ And I thought, ‘Oh gosh, there’s something in the water with this song.’”

As “I Hope” continues its climb up the charts, Barrett is also gaining traction with a few other songs. “The Good Ones” is a major contrast to “I Hope,” and Barrett wrote it about her husband. “I thought it would be kind of cool to release it after ‘I Hope’ to say not all men are bad, there are good ones out there,” she says. 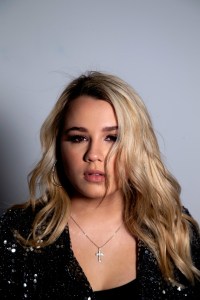 The video for the song is also touching. It stars Madeline Delp, who was named Miss Wheelchair USA in 2017. For most of the song, the video looks like any other with a young couple clearly in love. He pushes her in a shopping cart at a supermarket, they enjoy swimming in a pool, picnicking in the meadow. It isn’t until the end that the viewer realizes the actress is actually in a wheelchair and the carpentry project the male lead has been working on is a harness that will hold her up so they can actually fulfill her dream of being able to dance with her love.

“I wanted to make the music video special,” Barrett says. “I have some handicapped people in my family: my nephew has cerebral palsy, my cousin has autism. I just wanted people to know that even if they have a disability, they still have a really good chance at finding love and to never give up because you think you look different than most people that walk around. I know family members have struggled with that in the past and I just wanted to give a little hope to them because I know it must be very hard.”

At the end of the video, Foehner makes a cameo.

In addition to their love of music, the two also bonded through their faith. “We believe in the Lord very strongly,” she says. “We’re both Reformed Christians and that’s what we base everything off of. The Bible is very important to both of us and that’s what we use to steer our lives. I’m very lucky to have him and I’m lucky to have the Lord guide and put his hand in everything.”

Barrett plans to tour with Brad Paisley this year, and Foehner will accompany her on the road. “He’s now picked up the guitar role in my band — he can rip a guitar insanely well — so you’ll see him on stage with me. We do this together,” she says.

Also on tap for this year is her first album. She’s just about completed the project and says she’s written nearly every cut on it. She also hints at some “cool collaborations” that could include Foehner. “Maybe,” she says with a laugh.

On the album, Barrett’s vocal prowess will undoubtedly be showcased. She says growing up, she listened to all kinds of music and points to everyone from Whitney Houston and Aretha Franklin to Dolly Parton, Patsy Cline and Loretta Lynn as favorites.

Perhaps it’s these eclectic influences that have helped attract fans to her music, even in an era when female artists have had a hard time gaining recognition. Although male artists have been dominating country music for the past several years, Barrett says she hasn’t personally experienced any barriers to entry. “This is my first experience and [country radio has] been so welcoming to me and my music,” she says. “I think there’s room for many boys and girls, I don’t think it’s limited to anything. But I can only speak for myself.”

Her style is also eclectic. She calls herself a “neutral gal,” partial to black, silver, gold and brown. “If I had to define my style, I’d say edgy sleek,” she says. “Some people I like are Carrie Underwood, and I like some things Gwen Stefani has worn. In terms of brands, Jovani is one of my favorites, and also Zhivago, and I love Steve Madden shoes. We’re on a budget still so we’re not up there with Louis Vuitton yet.”