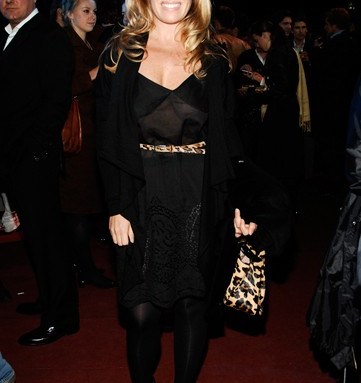 GAGOSIAN’S MOSCOW MOB: Stars of the international art world mixed with Russian oligarchs and It-girls in Moscow on Wednesday for the opening of Larry Gagosian‘s new show, in which works by Jeff Koons, Jackson Pollock and others are exhibited in a former chocolate factory.

The highlight of the evening was an exhilarating, ear-splitting motorbike performance staged by artist Aaron Young that had guests whooping as they sat on bleachers in the chilly evening air. Attendees, some of whom were visiting Russia for the first time, said they¹d had experiences both weird and wonderful here.

“I went to a strip club last time for the first time in my life,” exclaimed Charlotte Sarkozy, in a lacey Prada dress and a mink and jewels by Russian jeweler Helen Yarmak, whom Sarkozy met on the flight from New York. “The girls were beyond beautiful,” she hastened to add.

Actress Leelee Sobieski, who glided through the party speaking French with her father, has been here a month shooting a movie called “Mad Cow” — ­ it’s “top secret,” she said, but she confided that she’s co-starring with Ed Stoppard and that the film has one American director (Jamie Bradshaw) and one Russian director (Alexander Doulerain).

One thing about Russia that stuck in her mind is a particularly pleasant hotel bathroom experience she had while shooting in Oryol, a few hours outside Moscow.