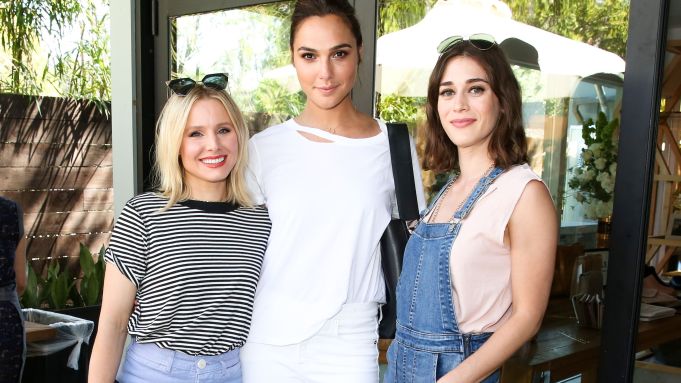 “Wonder Woman” star Gal Gadot was among the actresses who attended the N:Philanthropy “Give Back” Garden Party on Wednesday at The A List founder Ashlee Margolis’ Beverly Hills home.

Adding to the afternoon’s laid-back friends-and-family vibe, Margolis’ son wandered around the party. “How old are you?” Gadot asked the youngster, who seemed unaware of the starry crowd and asked his mom if he could watch a movie elsewhere.

After picking up products from Nyakio Beauty, Fashionable and N:Philanthropy, Gadot caught up with Kristen Bell and Lizzy Caplan. “I’d never met her before,” said Caplan, who admitted she hasn’t yet seen “Wonder Woman.” (She’s in the minority. The film has made more than $660 million worldwide.) But Caplan had a good excuse for missing it. “I’ve been in Serbia for two months. I’ve been on a different planet. I was shooting a movie [‘Extinction’] there, so I’m pretty jet-lagged and very out of it right now.”

Minka Kelly attended with Fashionable’s fashion director Jordan Soderholm in order to educate attendees on the socially conscious company’s commitment to employing women in Ethiopia, Mexico, Peru and Nashville who have overcome difficult circumstances like the sex industry, addiction and homelessness. Kelly talked about the brand’s latest initiative. “We’re going to be disclosing what our garment workers make because we feel like that’s the only way to make sure that women are paid fairly in this industry,” she said. “We want to encourage other companies to also disclose their wages, so that we’re all transparent.”

Camilla Belle and Emmy Rossum donned looks by contemporary line N:Philanthropy, which donates a portion of sales to charities. “I’ve been wearing their line for a while,” said Belle. “They give back to Children’s Hospital [Los Angeles] and I volunteer there regularly. I love that they do that.” Rossum said her personal involvement with the Best Friends Animal Society contributes to her love of the brand. “A lot of the work they do is focused on animal cruelty prevention and that’s close to my heart.”

Others in attendance included Cat Deeley, Jamie-Lynn Sigler, Jurnee Smollett-Bell, Katharine McPhee, Serayah McNeill and Katherine Schwarzenegger. For her part, Belle said she was looking forward to a low-key Fourth of July. “I haven’t really planned anything yet,” she said. “I’ll probably end up manning the BBQ — if not one day, then a few days this weekend.” McPhee agreed. “I think I’m going to do a lovely low-key house party with friends.” McPhee then paused. “Not my own. I’m going to go to a house. I’m not throwing a party at my house.”