The English actress was 23 and working at Hollister when she booked "Game of Thrones." Now that the show has ended, she launches into phase two of her career, starring in the Mindy Kaling-created Hulu adaptation of "Four Weddings and a Funeral."

Nathalie Emmanuel is usually a fairly orderly person, but for the moment her house is a bit of a mess. “It could only be described as a war zone,” she says, over the phone from the U.K. “It was like World War III happened in here.”

When you’ve been juggling the press and attention that comes with the end of “Game of Thrones,” and are in the midst of launching your next act subsequently, things like bills and laundry can go a little by the wayside (luckily for Emmanuel her mother came to the rescue with an assist). The 30-year-old English actress, famed for playing Missandei on “Game of Thrones” is still a bit frazzled from it all — not to mention sorting through the media attention following Missandei’s controversial death on the show.

“Most people, just when they now see me, they’re like, ‘Oh, glad to see you’ve still got your head,’” Emmanuel says. “But the outpouring of love for Missandei has been overwhelming, in fact. And also what happened, which I’m sure you’ve seen, is it’s really sparked conversation around representation because of the fact that Missandei being the only woman of color was killed in such a brutal way. She died having been enslaved. She died in chains. [The fallout] has been quite intense. It generates some really fantastic conversation around the issue of representation and why it’s important, and why the next time a show like this, if there ever is a show that’s like this again, that we really do better when it comes to representing more people.”

After spending most of her 20s in the “Game of Thrones” world, Emmanuel begins her second act with “Four Weddings and a Funeral,” which has been (quite) loosely adapted into a series for Hulu by Mindy Kaling.

Landing the part on “Four Weddings and a Funeral” seemed to symbolize the monumental transition of life she was experiencing both professionally and personally.

“I became an aunt. I gained a brother-in-law. I turned 30. I had all these like big kind of life things happening, and my family did, and I actually got to be here for them because I was in London,” she says.

Her character is Maya Jones, a communications director for a U.S. senator she also happens to be having an affair with. Her three best friends from college all have moved to London, and when the relationship with the senator implodes, she flees to London to try and make sense of life.

“Often in romantic comedies, there are lots of archetypes. You’re either the good guy, or the bad guy, or the funny guy. She’s very complex,” Emmanuel says. “And that’s what’s so great about Mindy’s writing, that all of these characters are kind of a bit messy, like we all are in real life.”

Emmanuel got into acting to cope with childhood shyness. Her mother never really saw it as anything more than that, but things began to escalate and Emmanuel ended up landing the part of young Nala in “The Lion King” stage musical when it went to London, in 1999.

That was when she realized acting was something she’d like to pursue professionally, but her mother insisted academics remain her focus.

“I couldn’t have time off to go and do a job — I had to focus on school,” she says. “When I got into my late teens, that’s when she was like ‘you’ve completed your schooling as far as the government says you have to. Anything that happens from here is up to you, really.’” 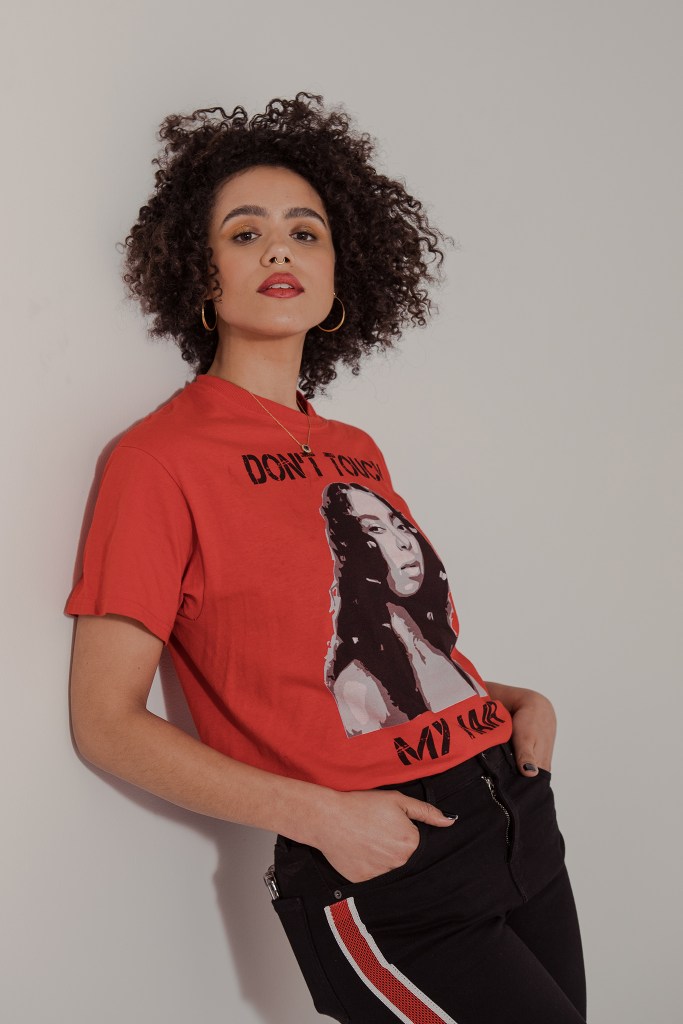 She got a job on the British soap “Hollyoaks” when she was 17, and after a few years was sort of figuring out her next move, working at a Hollister in Liverpool, when she booked “Game of Thrones.”

“I’m actually really good at organizing and folding things — I have a really specific way of folding,” she says.

Emmanuel says she didn’t really know where her career was going to go following “Game of Thrones.”

“It’s natural when you come out of a long-running thing to have some questions about, ‘Oh, what’s going to happen? Am I going to get a good job?’ There’s always anxiety that can come when, like, the job that’s been keeping me ends. It’s natural,” she says.

She had six or so months of unsuccessful auditioning before “out of nowhere,” there was “Four Weddings and a Funeral.” It matched everything she had on her wish list: It was a starring role, it was an American character, it was based in London and it was contemporary.

“It couldn’t be further from ‘Game of Thrones’ — it’s a romantic comedy, it’s very fun and, obviously, builds its life issues and world issues. But there’s definitely a lightness attached to it,” she says. “And nobody gets briefly decapitated or impaled on anything. So that’s good.”