Guests made their way into the Watermill Center for its fund-raising gala by climbing a gigantic hill covered in bamboo shoots and tiki torches. 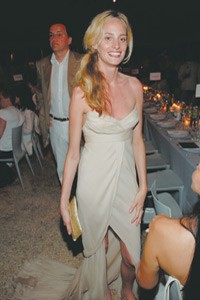 “I didn’t know it was a white party,” Gabby Karan said as she made her way into the Watermill Center for its annual fund-raising gala on Saturday night. No matter: She was paying, she was bidding, and who could argue with that? “I just love that,” she said of a painting of a nun — and she promptly went to pencil in a bid. “That’s what Gabby was in another life,” said her mother Donna, who appeared to be only half kidding. The evening was a fund-raiser for Robert Wilson‘s new art center. Guests climbed up a gigantic hill that was covered in bamboo shoots and tiki torches. Video installations and electronic billboards added to the Buddhist temple-like effect. Nearby, on the lawn outside, a catatonic woman covered in cigarettes clicked a remote control. Each time she changed the channel, a group of people in white body suits and matching balloons tumbled on the ground in another direction. The piece seemed to be commenting on the destructive power of television (the tube as mind control!), but not everyone in the crowd got it.

“Do you think I’m supposed to offer her a light?” wondered publicist Peggy Siegal.

“I wouldn’t take it too seriously,” warned another art-world type. “The real point is the juxtaposition of the white balloons on that green grass. It’s just a great combination in color.”

As for the guests, they too were color coordinated: Helen Schifter opted for a pale gown from J.Mendel, as did Lauren Davis (though the real showstopper was her much talked about engagement ring), and Isabella Rossellini accessorized with a yellow Labrador that she’s training to be a guide dog for the blind. “Joe is his name,” she explained. “I have him for a year and my job is to teach him 10 commands. Today, we’re training him to act like a socialite.”