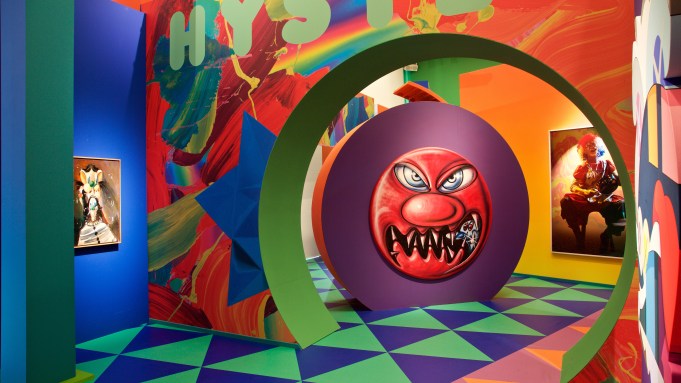 LONDON — The British set designer and illustrator Gary Card has transformed Phillips London gallery into a psychedelic wonderland as part of a show called “Hysterical,” which opened Thursday and runs until Aug. 21.

“‘Hysterical’ reflects on both my past and future as a painter. This experience has allowed me to create paintings and design a world around them as well as providing a set installation that envelops the work of my contemporary art heroes,” says Card.

The space is a visual treat, and an explosion of colorful cartoon graphics. It’s done from floor to ceiling, with a decor that ranges from green and purple smiley-faced flooring to alien-like creatures and animals standing guard on top of walls.

Upon entering, the audience is greeted by Scharf’s life-size “Evilcute” work of art, a graphic of a cute mouse smiling from behind an evil-looking cartoon face baring its teeth. A sculpture created by Studio Smack sits on a purple container, which is situated by the entrance. Inside are videos of fantastical and futuristic beings interacting, also created by Studio Smack.

It’s difficult to see where Card’s set design ends and the artists’ work begins. “The main challenge was paying respect to the works of art that I admire while creating an experience that integrated those works into one unifying piece. In the end I almost had to forget about my reverence for the pieces,” says Card.

“I had to remind myself a lot of the time that the artist may not be happy with how we’ve interpreted their work, and some of our audience won’t like it either. This show is a risk but I think that’s important,” he adds.

There is a lot to take in and around every wall and pole is different. Multicolored PVC curtains give way to a life-size polka dotted flower sculpture next to a blue and red house, with painted phallic-shaped sculptures inside.

On every wall there are pieces of art, including Erik Parker’s “No Use In Cryin’” and André Butzer’s “Himmler.”

“Everything explores the same theme, graphic cartoon Americana with sinister undertones, colorful chaos and oversaturation. The concept began with a project I created a couple of years ago called “Happy Breakfast,” explains Card.

“’Happy Breakfast’ is a self-contained world where I explore my most unrestrained creative impulses. It’s a design philosophy where I began to free myself from the constraints of the ‘less is more’ sensibilities I had trained myself to work within as a commercial set designer,” he adds.

Card is known for his conceptual set designs and has worked with brands ranging from Nike, Hermès, Balenciaga and Comme des Garçons to Charles Jeffrey. Of the latter, he says: “We never have any budget for the sets but in a way they are better, we have to think about how we achieve maximum impact with really inexpensive materials.”

Given Card’s work in the industry, he’s also incorporated fashion into the set design for “Hysterical.” “I thought it would be fun to nod to my career in fashion,” he says.

In the exhibition, Card included an image the set designer created with the photographer Tim Walker. “It’s a fun, psychedelic cartoon costume I made for a shoot we worked on for British Vogue. He seemed to fit the theme perfectly so I worked the image into the set and Tim very kindly let me use it,” he adds.

Card also included a gigantic pickle man sculpture, an homage to Kim Jones. Jones had used the character in his first collection and Card later reused it in an installation for Jones at Dover Street Market Ginza.

“Art shows can be quite intimidating and my ambition was to create a show that is accessible, infectious and fun, something that the audience could explore and interact with. The show is loud and raucous. I’m not saying this should be the case with art shows moving forward, but it was definitely fun to take the concept of the austere art show and turn it on its head,” Card says.