Described by George Clooney as “easily the best actor of her generation,” Cate Blanchett was among the Australians honored in the virtual awards show.

SYDNEY — “You may have a red carpet, but how about this — kangaroos on tap, mate, on the set!”

So noted veteran Australian actor Jack Thompson standing in front of a mob of kangaroos on a shoot location during the preamble to the virtual 2021 G’Day USA AAA Arts Gala.

A fixture for 18 years on the New York and Los Angeles party circuits, thanks to COVID-19 the annual black-tie gala organized by G’Day USA was forced to go virtual for the first time this year. The organization, Australia’s leading public, economic and cultural diplomacy program in the U.S., teamed with the American Australian Association to stream the event on Thursday evening U.S. time on the AAA website and social channels.

Indigenous musician William Barton kicked off proceedings with a traditional Welcome to Country, before taking up the didgeridoo to perform “That’s What Friends Are For” with Im, Manuel and Chris Sebastian. Hay wrapped things up at the end with the entire cast for a rendition of Men At Work’s “Down Under” classic. 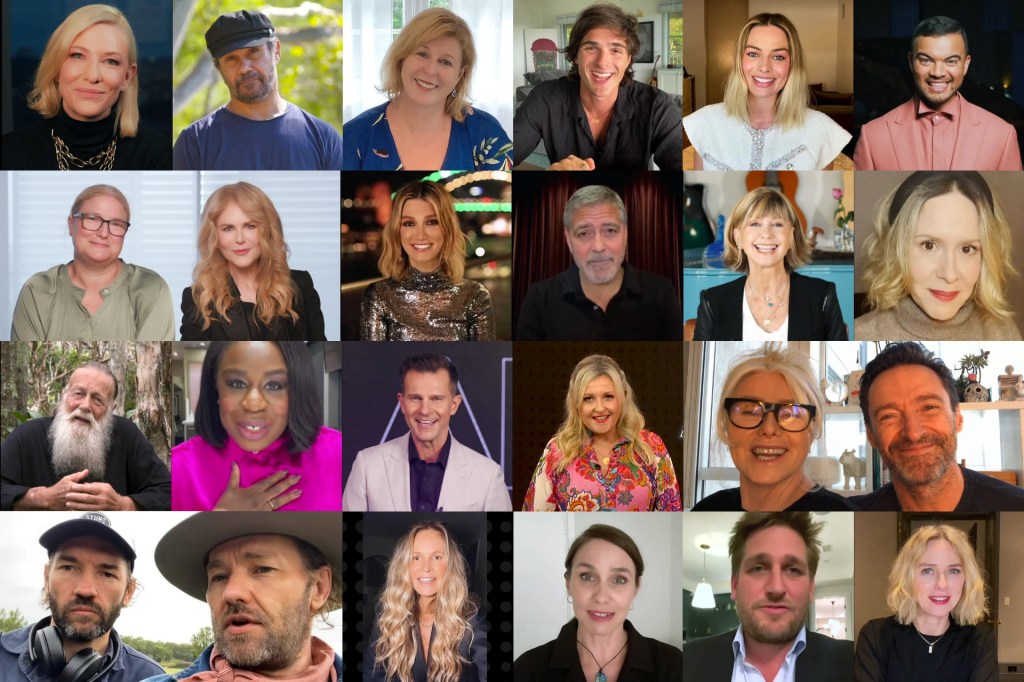 Composite of presenters and award recipients who appeared during the 2021 G’Day USA AAA Arts Gala.

The rest of the coverage was a mosaic of video interviews with over 30 Australian and American entertainment figures, from Hugh Jackman to Nicole Kidman, Naomi Watts, Margot Robbie, George Clooney, Sarah Paulson, Uzo Aduba, Cody Fern, “Crocodile Dundee” star Paul Hogan, Elle Macpherson and Olivia Newton-John. They appeared by video recorded in their homes, on shooting locations — and in the case of “Once Upon a Time” star Emilie de Ravin, in her car — in Sydney, Melbourne, London, New York, Boston and other cities. 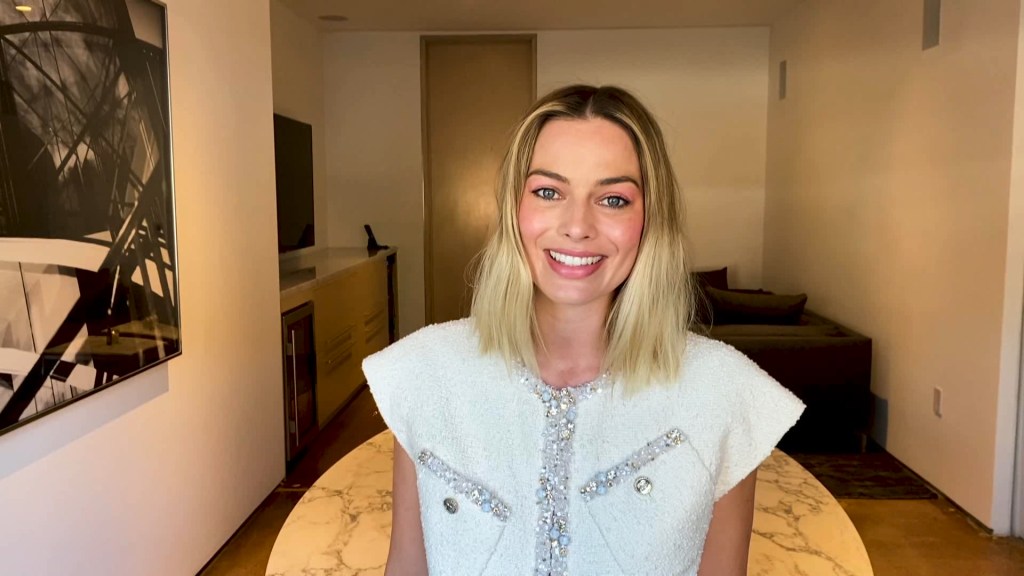 Kidman and producer Bruna Papandrea sat together to present the Excellence in Literature award to Australian best-selling author Liane Moriarty, two of whose books — “Big Little Lies” and “Nine Perfect Strangers” — have been transformed by Kidman and Papandrea into television series for HBO and Hulu, respectively.

“We’ve loved being on this ride with you — our friend, our collaborator and our favorite author,” Kidman said. “Go Aussie!” 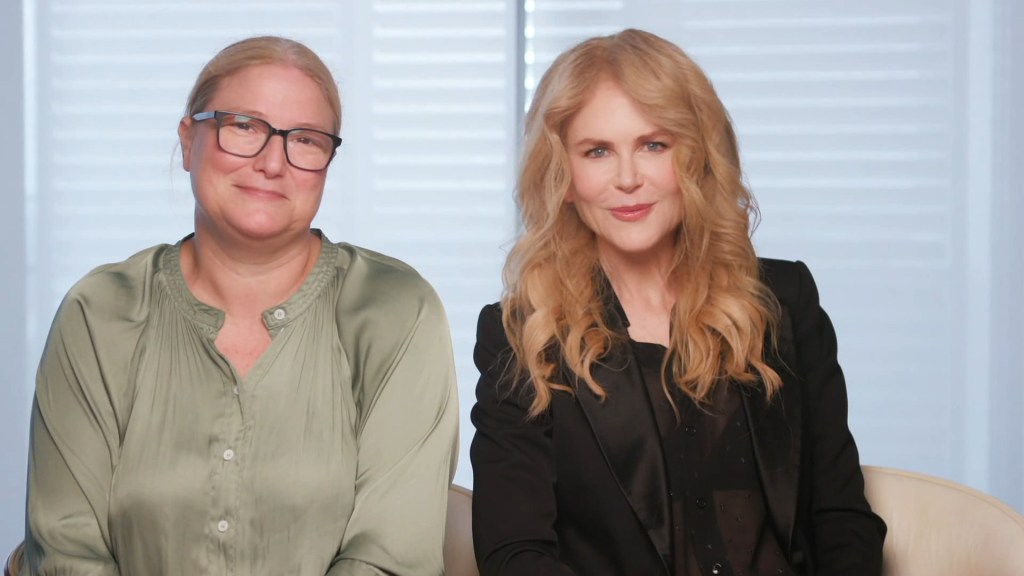 Thompson and fellow actor Tasma Walton presented Wildside and “Mystery Road” star Aaron Pedersen with the Excellence in Television award, the first Indigenous Australian to be recognized with the award.

“I’m very very honored to be the first Indigenous Australian [honored],” Pedersen said. “I know I won’t be the last.”

Cate Blanchett received the Lifetime Achievement Award, which was presented by Paulson, Aduba and Clooney, who described Blanchett as “easily the best actor of her generation.”

“It’s been the great privilege of my life to be able to work inside the industries of these two great countries [Australia and the U.S.],” Blanchett said. “So I’d like to thank all of the trailblazers who paved the way for actors like myself. [Directors] Bruce Beresford, Gillian Armstrong, Peter Weir, Phil Noyce, George Miller, Warwick Thornton, Rachel Perkins, [cinematographer] John Seale, just to name a few. There’s so many writers, directors, cinematographers.” 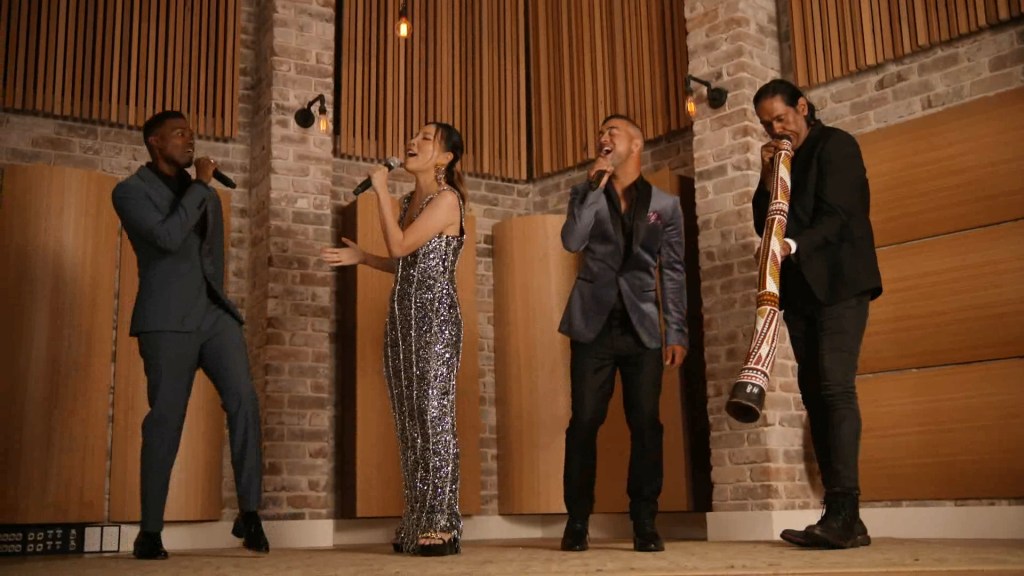 There were references galore to mates, koalas, the famed Australian Vegemite spread and the pandemic — one beneficiary of which has in fact been the Australian entertainment industry, with an unprecedented influx of international actors and productions currently in Australia.