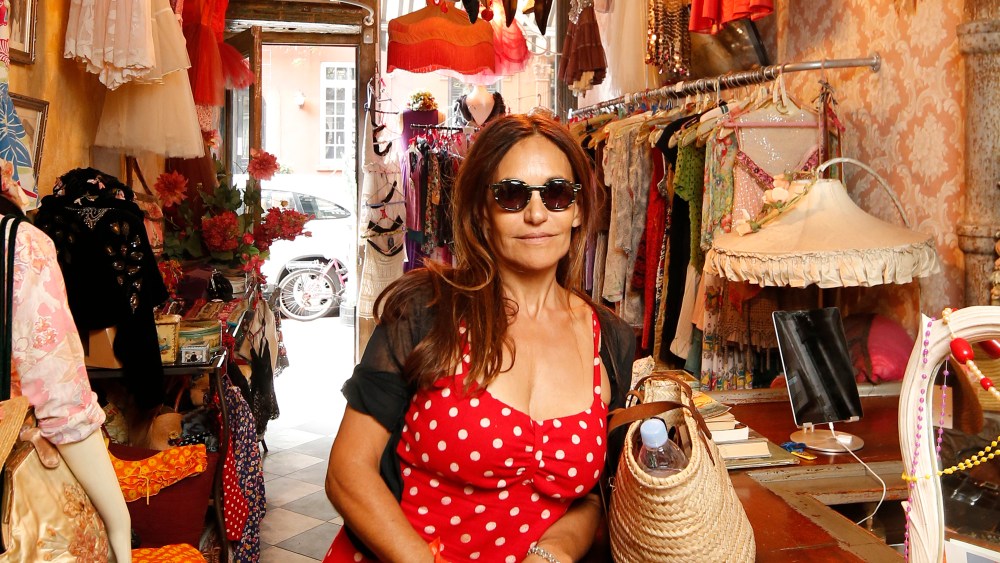 En route to Tuesday’s premiere of “Grandma,” Lorraine Kirke stopped for a quick photo in front of a billboard for “Mistress America” just as her daughter Lola, one of the film’s stars, walked by. “Neither one of us knew the other was going to the premiere.” Lorraine Kirke said. “She said to me, ‘Mom, what are you doing?'”

Out-of-character as that was for the lesser-known Kirke, it seemed a minor proud mother moment, in light of her daughter’s increasing fame. Like her four children, which include “Girls” actress and artist Jemima, Lorraine Kirke isn’t any one thing. So much so, when a friend introduced her at Tuesday’s premiere as “Lola Kirke’s mom” and later explained, “From now on, that’s what it is,” her response was, ‘Oh really.'”

But in truth, Kirke is all about family. Geminola, the Perry Street vintage boutique she opened in 2004, is named for her brood — Greg, Jemima, Domino and Lola. Before an interview at Sant Ambroeus Wednesday morning, she popped into the shop and mentioned a dress was needed for a friend heading to the South of France for the wedding of Bob Geldolf’s daughter. That task seemed simple enough, considering the nearly up-to-the-rafters assortment of one-of-a-kind dresses. There is also an atelier two doors down for customized wedding dresses. Along with the Prince Charles/Princess Diana commemorative wedding tin and tartan Fifties bikini, the store houses vintage shoes, bags and children’s clothing (because her kids had kids). Her five grandchildren’s initials are inked on her right wrist in a design by Jemima, who can also tattoo but had not in this case.

Like fame, trends are not what Lorraine Kirke is after. “Basically I don’t follow any trends or any rules. It’s very important to like what you do. I love everything in there. If I didn’t, it wouldn’t be in there,” she said. “I just do what I like. People always use words like eclectic or bohemian but I don’t like that because it’s kind of contrived. Maybe I’m just a gypsy.”

Jemima, as well as Lena Dunham, worked at Geminola at one point, as did Lola Kirke, Domino (a musician and doula), Greg (a commercial photographer) and their cousin Charlotte Olympia. The Kirke sisters still drop by, often helping themselves to an item or two. Lately though, Lola Kirke has been turning to stylist Susan Winget. “Not only have they all worked in the store but I think I opened it so that all their friends could get jobs there as well.” Lorraine Kirke said. “But they knew how to laugh. They didn’t take themselves too seriously.”

“They’re all individuals, they’re all self-supporting and they’ve all done what they’ve loved. Maybe I helped out with that.” she said. “Your children are your children for just a little time and then they’re their own people. It’s kind of a little narcissistic to say, ‘They’re just like me.’ They’re their own people. I think, ‘Give them their due.'”

Kirke is in the midst of her own new incarnation. In conversation, she said the “Silence” tattoo on her left wrist was for years “Si,” a reference to her husband Simon. The tweak was made, since she and the Bad Company drummer are divorcing. That has triggered newfound freedom including a jaunt to Paris with Jemima for the Chanel show, an eight-month stay at the Lafayette House and now a new Elizabeth Street one-bedroom apartment. Reluctant to discuss her work in Haiti for fear of sounding self-promoting, Kirke allowed that she and Lola recently spent five days there and her daughter plans to return next year to open a music camp for children with the help of humanitarian Emily Hine.

Kirke, whose father was the British property investor Jack Dellal, has long been interested in designing interiors. Mary-Louise Parker and Mariska Hargitay are among her clients. Rizzoli will publish her book “Would You Like to See the House? — Unapologetic Interiors” in the spring. With a Sept. 16 deadline looming, she knew it will get done. “Once I get into a project I do it really fast because I’m afraid to get bored.” The book’s gist, she said, will be, “Buy something. Don’t measure it if you love it. It’s like having a friend in your house — you wouldn’t have a guest in your house that you didn’t like. Have things in your house that aren’t necessarily needed but you love seeing [them].”

Despite her many interests, Kirke no longer works through the night, as she was known to do. “Maybe I was filling space. I had a dozen ideas a minute, less so now,” she said. “But I am still adamant about using only vintage textiles. Nice ones are now few and far between. That’s why my clothes are one of a kind.”

The same might be said of her offspring, who weekend with her and a hodgepodge of animals upstate. “I mean, it was hectic and chaotic and dramatic when they were growing up. But they’re all good people and that’s the most important thing,” she said. “The other day we were leaving a memorial service and they were walking together holding hands. I thought, ‘You know what? I did OK. They are all friends and they will be there for each other.”