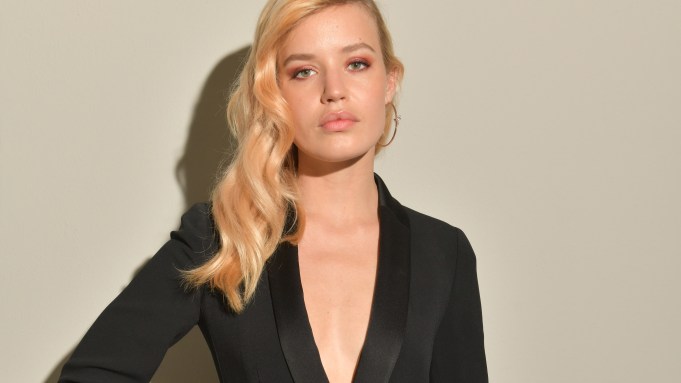 MILAN — Sitting front row at the Emporio Armani show on Thursday, Georgia May Jagger reminisced about her favorite music-related memories as the child of one of the world’s biggest rock stars.

“I try to go to concerts quite often, but I don’t go to as many as I used to,” mused the 27-year-old model, who currently lives between London and Los Angeles but will be moving to New York soon. “When I was a young teenager, we just used to go to Camden to see all the different bands, including my brother’s (James Jagger) who was in a band called Turbogeist.”

Her most memorable concerts are, of course, seeing her father Mick Jagger on stage with The Rolling Stones. “Seeing my dad perform is the best, because it reminds me of my childhood growing up,” said Jagger. “I always like it when they go back on tour.” She will be flying over to New Orleans to see the Stones play on May 2 as part of the New Orleans Jazz Festival.

As for her current musical obsession, Jagger cites her friend Lilith Ai. “I’m a bit biased, but I’ve been loving her acoustic rock tunes lately.”

The model, who has just bought a share in London-based hair salon Bleach and will be launching its first American salon in October, is gearing up for the release of her organic skincare brand, May.

“I’ve been working on it for a few years and I’m really excited about it,” she said. “It has all come from me and we worked really hard to make it all organic, and a lot of it is Made in Britain.” The launch is planned for this autumn.