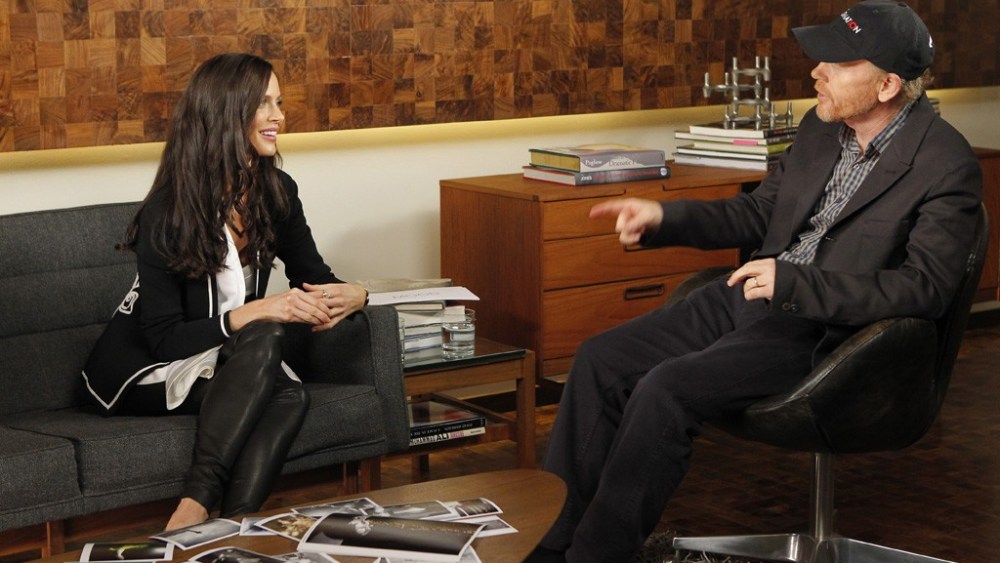 “I think Canon folks are really onto something with this creative experiment, and I love the way it inspires individual creativity and uses social media in such a positive and dynamic way,” Howard told WWD.

Last year, Canon and Howard launched the user-generated photo contest Project Imagina8ion in which eight photographs were selected out of 100,000 to inspire the award-winning short “When You Find Me,” directed by Howard’s daughter, actress Bryce Dallas Howard. This year’s contest will be based on 10 storytelling elements with 10 films to be produced, five by directors who will be revealed at a later date.

“We wanted to reach out to various disciplines,” said Howard. “Bryce said we had to have someone from fashion and Georgina was an obvious candidate. Maybe next year we include a choreographer, a scientist, a novelist.”

WWD sat down with Chapman in Los Angeles to discuss her plans for her directorial debut, which will mean that husband Harvey Weinstein won’t be the only one at home with movie experience.

WWD: Why did you decide to get involved?
Georgina Chapman: I had seen the campaigns and I really thought it was such an interesting idea and it was such a genuine approach to a product. When they came to me I thought, “What an amazing opportunity to do something like direct a movie and step out of your creative comfort zone and yet do something that is also so familiar at the same time.” I was also just excited to have the chance to direct, which I may never get to do again.

WWD: Describe the way photography is intertwined with your work as a designer and how you plan to take it into your film.
G.C.: Photography obviously lends itself so well towards fashion. It’s capturing that moment and that inspiration, and as a designer you are constantly walking through the world assimilating those visual references you have and so being able to solidify that into a photograph and keep it on your mood board is essential to creating a collection. Whether it’s going through libraries or taking a photo myself or taking stills from movies, my reference is a collection of photographs. So it’s a very natural transition for me to do this project, because that’s how I work as a designer.

WWD: Do you have an idea yet of what your short film will be about?
G.C.: I have so many ideas right now and what I would really like to do is take a look at the photographs and see where they take me because I don’t want to go too far down a road that doesn’t fit with what I see.

WWD: Is it your intention to veer away from fashion as a subject?
G.C.: I’m very open at the moment. For me it’s really about figuring out the story and the visuals. Obviously I want to do the costumes but I won’t have time to be the costume designer and the director, so I’m going to have to get someone to help me out.

WWD: What was Harvey’s reaction to you directing a film?
G.C.: When I first told him, he laughed. I’m now waiting for him to come home and say he’s going to do his first collection. I’m like, “Come on, then. This is easy, this filmmaking stuff. Now do a collection.”

WWD: Ron Howard said he was available on an as-needed basis. Do you plan to ask for his input or keep your work under wraps?
G.C.: I will definitely want to seek advice. It’s outside my expertise. I think it’s important for whatever you are doing, even if it’s a collection, to seek outside advice. If your world becomes too insular, it limits your creativity. It’s good to talk to people and get ideas. You don’t have to take them, but everyone has their own experiences and if you can get a little insight through someone else’s experiences, that just leads to more creative energy.

WWD: What has been the best part of the project so far?
G.C.: I think what really has impressed me the most is the photographs I’ve been looking at. Each one is extraordinary. I think that’s what’s amazing about a camera. It lets anyone express their creativity and show their point of view. These are how you capture your memories. I think everyone’s been on holiday and forgotten to take a camera and gone, “Why didn’t I take pictures?” I always have a camera now that I’ve got a kid, but I don’t think I’ve got one picture of anyone other than my daughter.