Germano Celant Dies at 80 of Coronavirus

The Italian art critic was the scientific superintendent of Fondazione Prada and considered the father of the "Arte Povera" movement.

By Sandra Salibian
with contributions from Luisa Zargani
on April 29, 2020

MILAN — Italian art historian, critic and curator Germano Celant has died here at age 80. The cause of death was the coronavirus, after he had been hospitalized for a few weeks.

Considered the father of the “Arte Povera” contemporary art movement, Celant collaborated with Fondazione Prada since its inception in 1993, when it was known as PradaMilanoArte and before its name was changed in 1995.

In particular, Celant was the artistic director of the foundation from 1995 to 2014, while in 2015 he was named scientific superintendent. He conceived and curated more than 40 projects for Fondazione Prada, from Michael Heizer’s solo show in 1996 to the retrospective dedicated to Jannis Kounellis in 2019.

In a statement released on Wednesday, Fondazione Prada’s presidents Patrizio Bertelli and Miuccia Prada said they were “deeply saddened for the loss of a friend and traveling companion.”

“Germano Celant was one of the central figures in the learning and research process that art has represented for us since the early times of the foundation. The many experiences and intense exchanges we have shared with him over the years have helped us rethink the meaning of culture in our present. Intellectual curiosity, respect for the work of artists, the seriousness of his curatorial practice are lessons that we consider essential for us and the younger generations,” read the statement.

As reported, in 2013 Miuccia Prada and Celant were honored by the Independent Curators International with the Leo award and the Agnes Gund Curatorial award, respectively, for their contributions to contemporary art, the work of the Fondazione Prada internationally and for the exhibition “When Attitudes Become Form: Bern 1969/Venice 2013.” Curated by Celant, the exhibition was on view at the foundation’s Ca’ Corner della Regina headquarters on the Venetian Canal Grande shore, and was singled out for its focus on the history of exhibitions and independent curating. 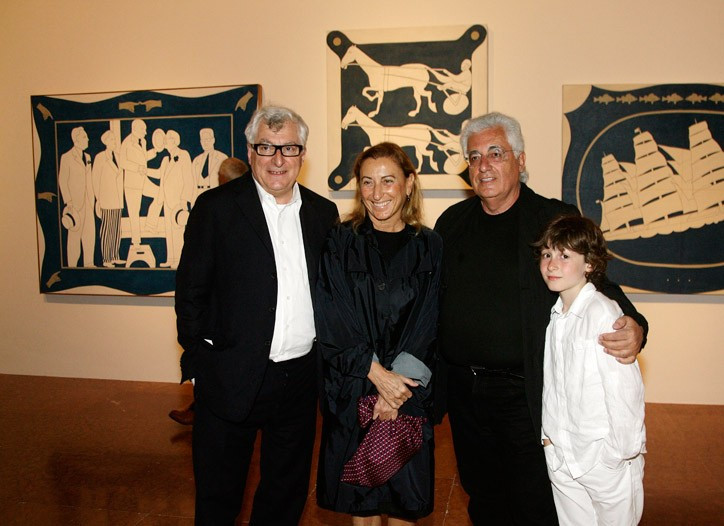 Patrizio Bertelli and Miuccia Prada with Germano and Argento Celant in Venice in 2009.  Giovanni Giannoni/WWD

Celant was born in Genoa in 1940 and graduated from the local university. In 1963 he worked as assistant editor for Marcatrè, a Genoa-based magazine about architecture, art, design, music and literature gathering a range of Italian prominent intellectuals, including Rodolfo Vitone, Maurizio Calvesi, Umberto Eco and Edoardo Sanguineti.

In 1967, Celant wrote “Appunti per una guerriglia” — or “Notes for a guerrilla,” in English — which is considered the manifesto of the Arte Povera movement and was published in the Flash Art magazine founded by Italian publisher and art critic Giancarlo Politi.

The “Arte Povera” term was properly applied to a group of Italian artists — with the core based in Turin — who condemned the corporate mentality, adopting a radical style and unconventional materials, simple objects and natural elements. It also intended to reaffirm the connection between Man and Nature and draw a contrast with the culture of consumerism.

“The Arte Povera is orphaned,” said Politi, who remembered the early days of the artistic movement and how the likes of Giovanni Anselmo, Alighiero Boetti, Pier Paolo Calzolari, Mario Merz, Giuseppe Penone, Michelangelo Pistoletto, Gilberto Zorio, Ugo Nespolo, Gianni Piacentino and Piero Gilardi would meet in Turin in 1967, swept up by “an air of freedom and renewal that made you feel at the center of a small revolution.”

One day Celant arrived from Genoa, “all dressed in black” and at the center of the meeting, he addressed the artists saying: “We have to establish a military regime.[…]Nobody will be able to set up an exhibition without the approval of the others, nobody will be able to decide to show in a museum or a gallery if not supported by everybody else.”

Politi said “Germano’s word was always very powerful, while I am still surprised by how the great critic from Genoa succeeded in keeping in line a group of rowdy and always wild [artists]. Ciao Germano.”

The exhibition “Im Spazio” that Celant curated at the Galleria La Bertesca in Genoa in 1967 is often considered to be the official starting point of the movement.

“He was a friend, I had so much respect for him,” said Penone, whose artwork “Leaves of Stone” was commissioned by Fendi and donated to Rome in 2017, placed in front of the brand’s store in the city. “He sensed the historical moment with extraordinary lucidity, and he became a catalyst, but all done with great freedom, without any imposition.” Penone said Celant had “a global vision,” working with international artists from all over the world.

In 1988, Celant was named senior curator of contemporary art at the Solomon R. Guggenheim Museum in New York, but he started to curate international exhibitions on Italian art before this appointment. Key shows included the “Identité italienne. L’art en Italie depuis 1959” staged at the Centre Georges Pompidou in Paris in 1981; “Italian art, 1900-1945” held at Palazzo Grassi in Venice in 1989, and “Italian Metamorphosis 1943-1968” that took place at the Guggenheim Museum in 1994. In 1997, he was the director of the Venice Biennale and in 2004 he curated the “Art and Architecture” exhibition in Genoa, that at the time was nominated European Capital of Culture.