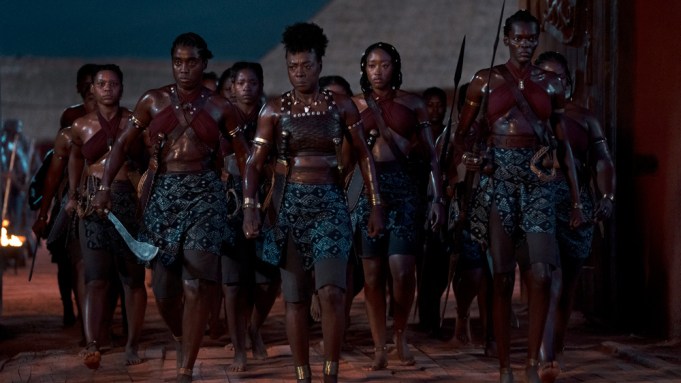 The film, which premiered at the Toronto Film Festival ahead of its theatrical release, stars Viola Davis, Thuso Mbedu and Lashana Lynch. Bolstered by strong critical reviews, the film is already part of the awards conversation heading into fall.

Set in the 1820s, the historical film tells the story of the Agojie, a group of female warriors who protected the West African kingdom of Dahomey. Phillips was familiar with the concept, having assisted Ruth Carter with research on “Black Panther,” which featured a group of fictional female warriors called the Dora Milaje. “The pitch [for ‘The Woman King’] came as ‘this is the story about the real Dora Milaje,’” Phillips says.

Phillips says she was “beyond excited” when she learned of the project. “Obviously, being a Black woman, it’s an amazing opportunity and an amazing story to be able to tell,” Phillips says. She had several rounds of interviews with director Gina Prince-Bythewood and the film’s producers, during which she shared early sketches of her vision for the costumes.

Phillips, who was working on the latest season of “Star Trek” when the call for “The Woman King” came her way, is excited about working on projects that allow her to build and create immersive worlds. “This one was interesting because we were doing precolonial Africa, which is a really interesting time to investigate and understand,” she says, adding that it’s also a time period not often depicted in studio films. “So that was really intriguing to me — also very daunting,” she says. “I really wanted to pay homage in the right way.”

The team aimed to stay true to history as much as possible, while elevating the onscreen aesthetic. “One of the words that everybody kept pitching was ‘elevate.’ They wanted it to be elevated and look beautiful and lush,” Phillips says.

An early reference photo that appears on a Google search for the Agojie turned out to be a propaganda photo used by the West during the World Trade Fairs. “We realized during our process that those images were not the images that we wanted to portray, as they were more exploitative images of the Agojie,” she adds.

Phillips homed in on fabric as a tool to root the sartorial look in authenticity. “Fabric is a huge part of telling the story right and also trying to be true and authentic to the world and the time,” says Phillips, adding that she didn’t realize how difficult fabric sourcing would be from the outset. Her team sourced fabric from Ghana — they hired a local shopper, and had items hand-carried by plane to avoid shipping delays — bought vintage fabrics, block-printed some original designs, and also discovered a Nigerian fabric artist on Instagram.

Outfitting an army meant creating visual cues to differentiate levels of status and affluence. Signals of wealth in the kingdom included numerous layers of fabrics and jewelry piled onto the body.

“Gina wanted always Nanisca to have the highest rank of everything,” says Phillips, adding that they gave Davis’ character the most of everything: her belts were always the biggest and most decorated, and she donned the most distinct jewelry, which was gifted by the king to warriors who performed well in battle. Nanisca was also the only character to wear a breastplate.

Phillips describes Davis, the film’s lead, as wonderful to work with. “The other thing that I love about Viola is she makes the room happy. She’s got a great sense of humor and she’s really collaborative,” says Phillips, touting the actress’ patience during many rounds of costume edits and tweaks to accommodate stunts and movement. “And working on her breast plate was quite a long and arduous affair; we had to make three of them altogether,” she adds.

Supporting characters including Izogie and Amenza, played by Lynch and Sheila Atim, were also given elevated costumes that evolved throughout the film as their ranking improved.

“When they first start, they have just a fabric band around [their waist], and then they get their leather belt, and then their rope. So it gives it elevation through the stages of advancement through the program,” describes Phillips, adding that her team incorporated pops of white trimming and white accessories as a nod toward Amenza’s status as a religious leader. High-ranking warriors were delineated by the use of gold thread in their belts.

“But we always kept Nanisca as the very echelon: the wealthiest looking fighter and warrior,” she adds.