Getting Down at Dance With the Dancers

Professionals and amateurs alike got to let loose Monday night at New York City Ballet’s Dance with the Dancers gala. 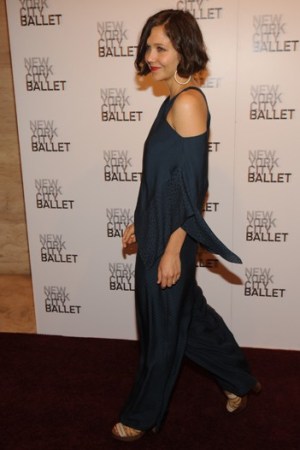 “I have a three-and-a-half-year-old so I’ve been going to the ballet a lot,” said the actress, who seemed sincerely awestruck by the dancers mingling in her presence. “It is really incredible to see the ballerinas because there really is kind of a magical thing around them. And I just think, God the things they do there’s no world in which I’ll ever be able to do that.”

Gyllenhaal had plenty of opportunity later in the evening to indulge her fascination. After dinner, NYCB star Sara Mearns introduced a hilarious music video skit entitled “Twirl” narrating a debauched day in the life of a dancer. Then company members Georgina Pazcoguin and Amar Ramasar led two teams in a dance off performance that ended with Ramasar’s trio winning for their Chippendale-esque moves set to “She Works Hard for the Money” (he and his fellow dancers stripped down to red briefs).

“It’s not really my thing,” said one guest of the male underwear display, “But I still clapped and yelled like mad.”