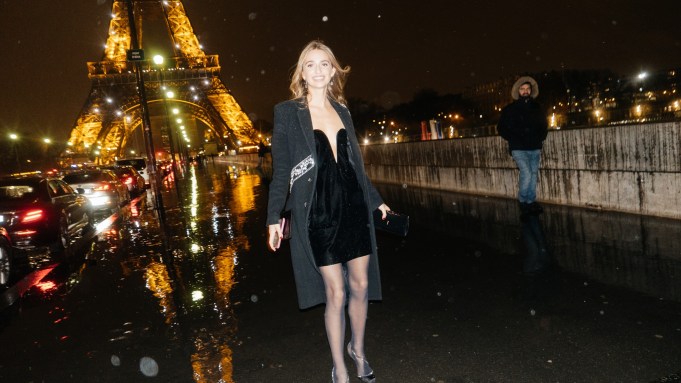 “I went to an event last night so I had my makeup done, but as I generally never wear makeup I didn’t have anything to take it off with,” said the New York University student and granddaughter of Diane von Furstenberg. “I literally spent one hour scrubbing my face with soap, thinking to myself — this is why I never wear makeup.”

Talita von Furstenberg was in her grandmother’s Parisian apartment, a sprawling set of rooms on the Left Bank complete with animal-print carpets, fresh flowers and huge paintings of Diane by Andy Warhol. She was getting ready to attend the Saint Laurent show later that evening.

While she usually flies over from New York to see the Paris ready-to-wear shows, this season she was over for a very special occasion: The whole family is attending her grandmother’s French Legion of Honor ceremony on Friday evening.

While in Paris, aside from shopping at Le Bon Marché and eating caviar-topped potatoes at Caviar Kaspia, the 20-year-old was planning to get a bit of work done — not coursework-related, but actual business.

In 2019 she launched TVF, a subsection of the DVF brand. The rtw collection drops twice a year, is angled toward a younger customer at a lower price point and has just been picked up by Net-a-porter, with von Furstenberg holding buying appointments this week in Paris.

“I’ve been wanting to do TVF since I was a baby. There are actual photos of me when I was six years old drawing dresses and writing ‘TVF for DVF,'” said the designer, who takes inspiration from vintage garments and natural elements for her line of dresses, tops and sweaters.

She’s also on a mission to bring more sustainability to her brand’s clothing production. Von Furstenberg is currently studying fashion business and marketing at NYU’s Gallatin School, with a focus on eco-conscious business practices. “I love that my course is directly applicable to what I do at TVF,” she said, adding that she divides her week between two days at the office and three days at school. “I’ve realized it’s really coming full circle: my classes are connected to what we discuss in business meetings.”

While switching production location is out of the question — the TVF line is made in the same factories as the DVF brand, located in China — the fashion designer is implementing sustainable practices step by step. “Instead of producing clothes frequently, we do two drops a year,” she explained. “Also, the collections are quite small: I only make things that I feel people will wear, that will sell and that won’t become deadstock. It’s a small step in a sustainable direction to produce less in general, but my next plans are to use more sustainable fabrics and dyes.”

Von Furstenberg’s outfit for the Saint Laurent show — a black velvet bustier dress from the brand and a pair of killer Christian Louboutin heels — is a departure from what she usually wears. “I always prioritize comfort above all and never, ever wear heels,” she laughed.

For a day at the office, she’ll pick a pair of Re/Done jeans, an Elder Statesman or LoveShackFancy sweater and a pair of “big, chunky boots.” To go out, you’ll see her wearing either a minidress and tights or a pair of HotPants. She’ll add a statement coat or jacket; outerwear is what she is most likely to splurge on as it gets the most wear. For the Saint Laurent show, she picked an Amiri embellished coat to shelter herself against the freezing rain that evening.

After giving her grandmother a quick kiss — the designer looked proudly on as her granddaughter struck fashion poses — von Furstenberg jumped into a cab, hoping the traffic leading up to the Trocadéro wouldn’t be too insane. Spoiler: it was. The last leg of the journey had to be done on foot, and crossing a cobbled street jam-packed with beeping cars is no mean feat when you’re wearing Louboutins in the pouring rain. Needless to say, she managed it like a pro.