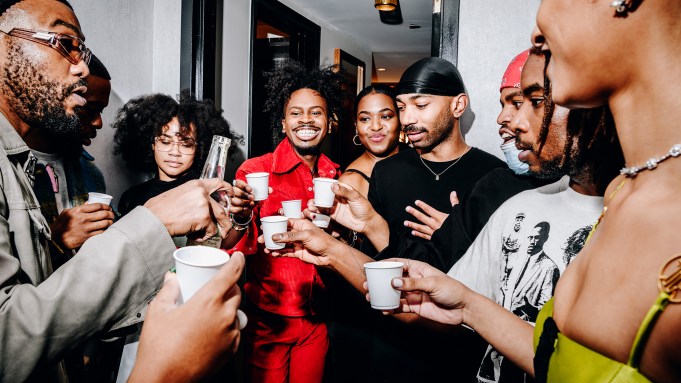 Brooklyn-based contemporary brand Theophilio took home the CFDA award for American Emerging Designer of the Year on Wednesday night in New York. But before heading over to the 2021 CFDA Fashion Awards ceremony at The Pool, located within New York’s landmark Seagram Building, Theophilio designer Edvin Thompson was a few blocks west at Le Méridien, where he got ready with his date for the evening, model Amelia Rami.

For the momentous occasion, Thompson donned a custom red corduroy two-piece suit with a corset-style lace-up, accessorizing the look with jewelry by Cartier and a white and green bracelet by Veert. Rami wore a fully custom black eyelet and chartreuse Theophilio gown, with shoes by Ekhator, a Brandon Blackwood bag and jewelry by Ananya and Grace Lee.

Thompson and Rami were sent off with a team toast — and another toast was in order soon enough for the beaming designer when his win was announced by model and “Squid Game” actress HoYeon Jung. Other American Emerging Designer nominees included Eli Russell Linnetz for ERI, Jameel Mohammed for Khiry, Kenneth Nicholson and Maisie Schloss for Maisie Wilen.

Theophilio was founded in 2016 and was a 2021 finalist for the CFDA/Vogue Fashion Fund, which supports emerging design talent. Thompson also attended his first Met Gala this past September as a guest of Lewis Hamilton, who bought a table to support up-and-coming Black designers. The Jamaican-born designer was accompanied by sprinter Sha’Carri Richardson, who he dressed in a custom red and black Theophilio gown.