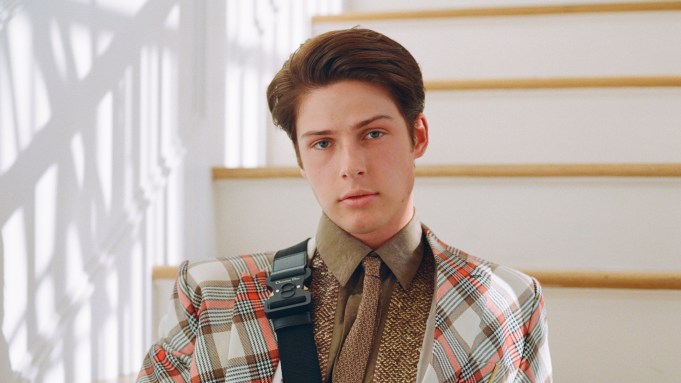 The 21-year-old Texas native, who relocated to Los Angeles, has recently been seen at fashion shows for Prada and Louis Vuitton, tapped for a number of campaigns for the likes of Fendi, Hugo Boss and Ralph Lauren (as one of the faces of its Romance Eau de Parfum ad alongside girlfriend Amelie Zilber, a fellow social media personality and Young Ambassador for UNICEF).

Most recently, he’s been partnering with Dior; the brand invited Gray to its men’s show with ERL in L.A.’s Venice Beach. Working with stylist Brian Meller, Gray opted for a Dior plaid jacket, sequined shirt and jeans for the occasion.

“I was going for something fun,” he said of the look at the after party. “It’s something that I haven’t worn before. I feel like I’m always in a suit and a tie or a bowtie. I just wanted to have fun tonight.”

He was a “big fan” of the new collection: “There was a lot of color, and I love color, to be honest with you. There wasn’t one thing on the runway that I wouldn’t wear myself. I literally want to own every shoe, every item of clothing that was on the runway. And I might have to shop at Dior right after this.”

Above, scroll through the photo gallery for a behind-the-scenes look with commentary from Gray as he got ready for the show.