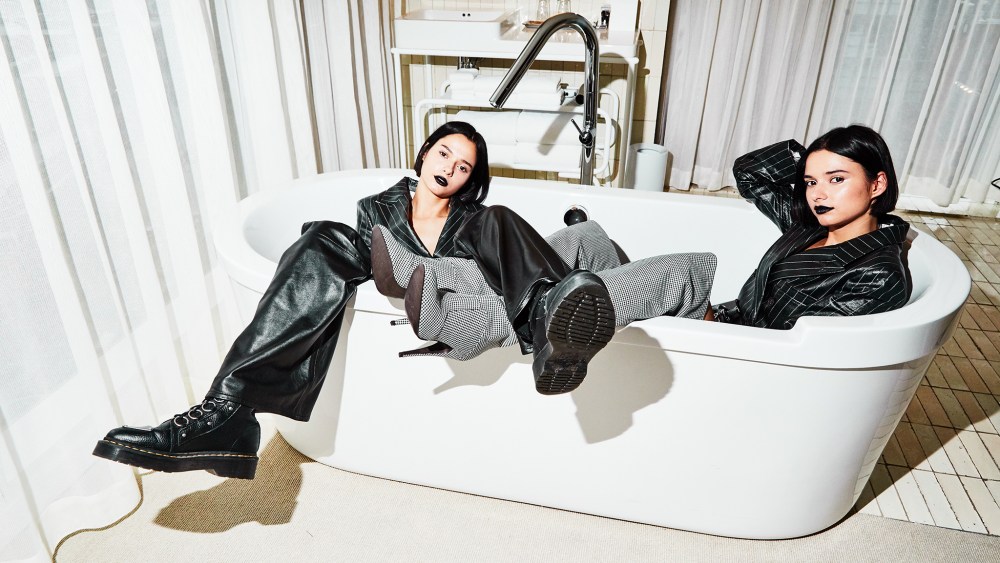 Anna and Sonya Kuprienko, the identical twin sisters known as the Bloom Twins, are standing inside their room at The Standard, High Line hotel in New York, with a sweeping view of the Hudson River and West Side Highway — and they’re bickering.

There isn’t an actual fight going down between the two London-based musicians and models, they’re going back and forth in the manner that sisters — particularly as those sisters who shared the womb and were born 10 minutes apart — do.

“The best songs usually only take three hours to make,” Sonya says while discussing their process in the studio. Anna usually creates the production, as she’s got an inclination for playing the keys, while Sonya loves good hooks, and therefore writes most of the lyrics and catchy melodies of their dark pop songs.

“No, no, no,” Sonya shakes her head, her pin-straight bob waving as she does so. “Three hours to have an idea, then to polish it: two hours.”

The “Love Me Right Now” artists engage in loving verbal spars like this regularly during the hour or so while they’re getting ready for the Tommy Hilfiger x Zendaya show they are attending that night. Anna and Sonya go back and forth, then ultimately find some middle ground and agree with each other. The two of them couldn’t be more different — Anna is logistics-minded and loves doing math, while Sonya is more of a dreamer — but they use their differences to their advantage, and it ends up strengthening the work they do together.

The Bloom Twins are originally from the Ukraine, and spent the first 16 years of their lives under the roof of their musician parents, who were in the same band and rehearsed all day, every day. “Our mom was going crazy, and our neighbors were as well,” Sonya says. They were sent to music school, where they could unleash all of their wacky sounds to their hearts’ desire. Music was always a hobby and interest of theirs, but it was modeling that spurred their move to London six years ago. A scout tapped them and introduced them to a musical manager, and since then, they’ve grown to become an intriguing duo for musicians and fashion folk alike.

When Anna and Sonya were growing up, their parents forced them to dress the same way — as a result, they try to stray from “twinning” — tonight, though, is an exception. They’re dressed in head-to-toe Tommy Hilfiger for two parties and Lily Aldridge’s perfume launch event. Their relationship with Tommy spans a couple of years — ever since the brand reached out to their agency, Models 1, asking them to appear in an Instagram campaign.

“If a designer sends us something we don’t like, we won’t wear it,” Sonya says, adding that in the beginning of their careers they had other people making stylistic and musical decisions for them. Now, they call the shots, and make suggestions or submit ideas to designers who want to dress them based on whatever’s inspired them that day.

Anna and Sonya finish their makeup, then rotate in and out of the bathroom to change. They’re 23, still vibrant and full of youthful energy, so they yell out in glee when they realize they both fit in the bathtub and scramble inside to take a picture. They’re off for the night — but not before Anna thinks for a final time about the way they collaborate, and how their differences and similarities work in concert to create something special.

“Looking back, I think the strongest and best stuff we’ve done is when we both understood that, yes, that’s something we both like,” she says. “And it’s quite hard to actually find this balance, right?”