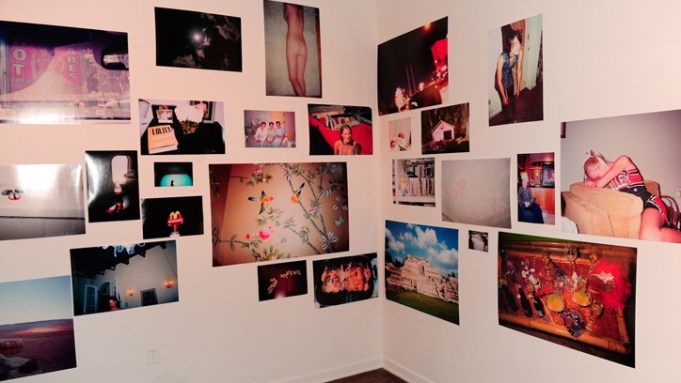 Thursday night’s art opening for Gia Coppola, Sage Grazer and Tracy Antonopoulos crossed generation lines as the budding artists and their PYT friends celebrated as if at a hip high school graduation party and their parents and their friends congregated separately, albeit in the same space. Jacqui Getty and Brian Grazer beamed as their respective daughters fluttered around the gallery with their posses, including childhood pals Joe Jonas, Camilla Belle, Nathalie Love and Charlie and Louie Eisner and Scout and Tallulah Willis; while the moms and pops in the room, including Demi Moore, and Ashton Kutcher, Lisa and Eric Eisner, Sofia and brother Roman Coppola and Lisa Love surveyed the scene. But the crowd was not limited to immediate family — rapper Common, Paul Jasmine, Stephen Dorff, Liz Goldwyn, Marisa Tomei, Arianne Phillips, Patricia Arquette and Steve Bing also stopped by, and in fact, stayed. “I bought two of your photos,” Dorff told Gia Coppola. But the sale was not as random as it may have seemed; Dorff is a family friend who is also starring in Sofia Coppola’s next movie. In fact, family, blood or otherwise, was the name of game last night. “I don’t think Ashton and Demi were really prepared to have their photo taken,” said Getty of her pals, who came by after long days at work. “They were just here for the kids.”