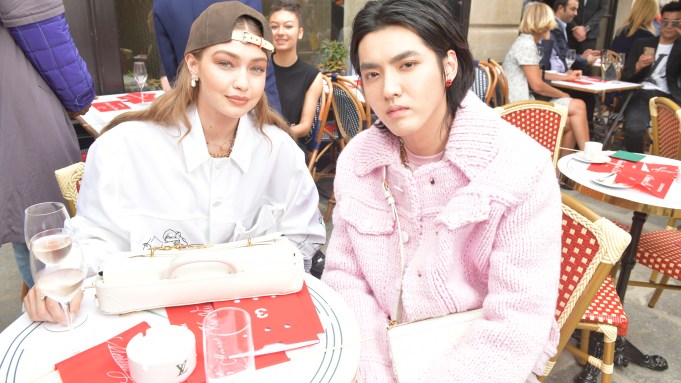 UN CAFÉ, S’IL VOUS PLAÎT: The quaint Place Dauphine and its romantic cafés was the scene for the Louis Vuitton spring 2020 men’s show, held in Paris on Thursday — but probably no Parisian café ever saw such a starry selection of patrons.

Model Gigi Hadid, who the day before had closed Virgil Abloh’s Off-White show, sat down next to Chinese actor and singer Kris Wu, a former member of Korean band EXO, at one of the café tables set along the runway, before being joined by Australian actor Joel Edgerton.

A couple of seats along from Antoine Arnault and Natalia Vodianova, past chief executive officer of LVMH Fashion Group Sidney Toledano, Valentino creative director Pierpaolo Piccioli confessed his order of choice when in a Parisian café: The classic espresso.

“But French coffee isn’t as good as Italian coffee,” the designer admitted with a playful grimace.

If you’re ever trying to find model Liya Kebede, try looking at the Café de Flore in Saint-Germain-des-Prés, her favorite Parisian haunt. “But I always order a cappuccino, which isn’t very French,” she said.

A couple of tables along, Japanese artist Takashi Murakami played with the animal balloon sculptures from the event’s balloon stand — there were also people serving crêpes and shelling out mini Eiffel Towers, just like any typical tourist spot in Paris — while Byredo founder Ben Gorham caught up with Sarah Andelman, former creative director of Colette.

Shoutout to Abloh: Romy XX, one half of British band The XX, wants to collaborate.

“I met Virgil in the past, he’s a really inspiring person,” said the artist before joining her seat. “His passion for music is incredible. We’ve had some really good chats about music, I love that he also DJs. He’s an inspiring guy; I would love to collaborate with him.”

The event teemed with music stars: Hip-hop artist Frank Ocean made a surprise appearance, while Colombian compatriots Maluma and J Balvin high-fived each other before joining their seat, on oversize Parisian park benches.

Other guests included American football player Cam Newton, who puffed on a cigar while waiting for the show to start, sitting alongside Formula One racer Lewis Hamilton and football player Victor Cruz, their feet dangling inches off the ground like children from the surreal oversize benches. It was quite a sight.