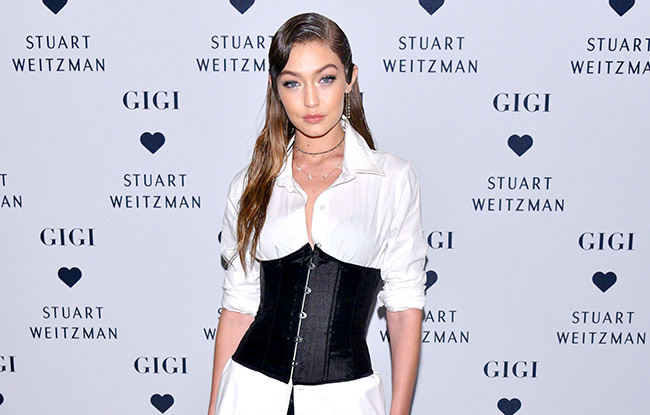 There’s no rest for the weary, even when your last name is Hadid (and your boyfriend is former One Directioner, Zayn Malik). Such is the case for jet-setting model and budding designer Gigi Hadid, who’s slated to walk in her second-ever Victoria’s Secret Fashion Show in Paris next month. The eldest Hadid daughter was in New York on Wednesday night to celebrate yet another one of her many endeavors: a collaboration with Stuart Weitzman.

The Insta-model was game to talk shoes, personal style and the new James Franco-directed film to promote the collaboration — in which she boxes wearing the mid-heeled booties for 12 hours. But she really lit up when the conversation topic moved on to pies. Yes, pies — as in baked goods.

And they don’t kid around when it comes to the holiday eats.

“I’m just really excited for Thanksgiving,” said Hadid, who was wearing an oversized button-down shirt with a fitted corset on top. “I always make pies for Thanksgiving. I’m the pie girl. I love rhubarb pie, I  love apple pie and pumpkin pie and blackberry pie — but sometimes that mixes with the rhubarb into one [pie].”

That’s a lot of pie.

“Well, we have a big family and they’re very picky, so I do lots of choices of pie,” Hadid said.

As for the rest of the Hadid clan, they all have jobs assigned for the holiday…except brother Anwar, a splashy model in his own right.

“My dad does really good stuffing and all of the meat, and my mom is the best for buttered carrots and cranberry Jell-O, or whatever you call it. Bella does dessert. Anwar just eats and I do pie,” she added.

So models do eat.