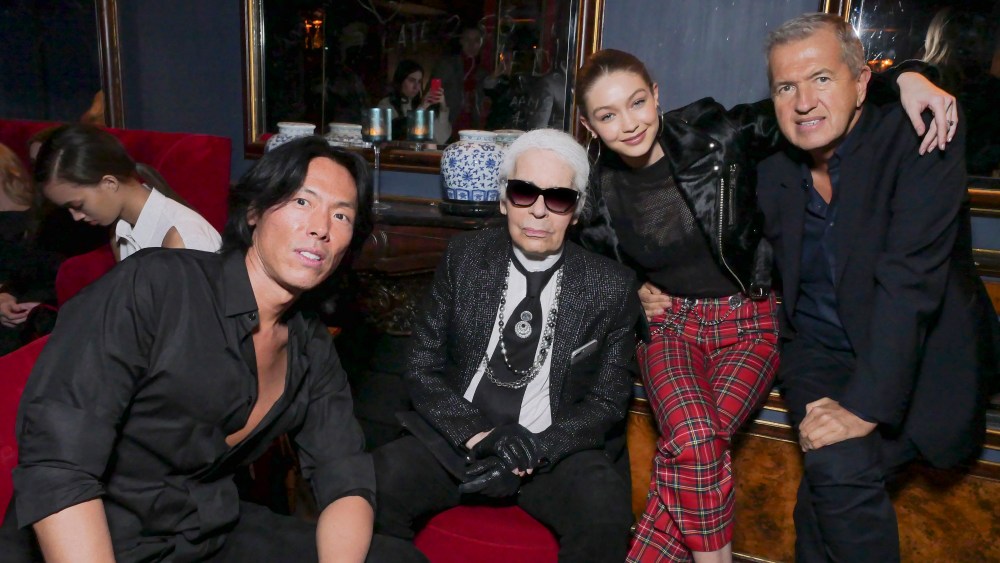 Gigi Hadid is diving into her new career in photography with a splash.

In addition to lensing the Versus spring advertising campaign, starring her boyfriend Zayn Malik, the model and designer has shot a constellation of fashion luminaries on Polaroid for a portfolio due to appear in V magazine’s May issue.

Stephen Gan, editor in chief of V Magazine and V Man, said Hadid has taken some 1,000 Polaroids over the last nine months for the project. A portfolio of 16 to 20 portraits will be published on May 1, with a second to follow later this year. Subjects include Karl Lagerfeld, Mario Testino and Olivier Rousteing.

“V has always been like a creative platform,” Gan said. “A year ago at this time, we were coming off a Gaga guest editor’s issue, now we’re embarking on a Gigi photographic portfolio. It’s what I love doing, and why I feel the magazine’s there. It’s meant to be that platform for people to express themselves.”

He acknowledged that critics might accuse the publication of jumping on the bandwagon by hiring the popular model. “I felt like it wasn’t about that. I felt like she’s had a real background in photography, and she’s got an eye, and I felt like she really has got that calling and it’s genuine,” Gan said. “She’s really multitalented, and a very, very special soul. It’s rare.”

WWD: You’ve been very discreet about your love of photography. When did you start taking pictures?

Gigi Hadid: Well, my mom photographed us our whole life — I guess that’s why we’re so comfortable in front of the camera. We loved cameras, we could always play with her cameras and she was very welcoming to teach us, and let us play with them. So that was amazing, and then as we got older, photography’s always been something that I can kind of do to take my mind off it and get to a creative place, which is why it’s so nice to be able to do this during fashion month — because if I can have a day in between two crazy days of shows to just be creative, I feel like I kind of have a mini vacation from it. And I guess that’s kind of what it was like when I was a kid. We were really competitive horseback riders, and so in between our classes or competition, I would just take my camera and shoot my friends and their horses. Then I started selling 8-by-10 prints, I had HadidPhotography.com that I built on this web site-building web site. And I, like, sold my photos of my friends’ horses.

WWD: How did you pick the people you wanted to be a part of this project for V?

G.H.: When we shot it the first season, it was more that I just had my Polaroid and I was kind of shooting randomly, and it wasn’t until this season that we kind of picked a style that we wanted to go for with it. So at first, I was just shooting people that were around me during fashion month — at fittings, at dinners, at the British Fashion Awards, you know, random stuff. And so I guess that’s kind of what inspired the whole thing, and that’s what it turned into — just kind of people I would run into during fashion month and get the courage to ask if I could take a Polaroid of them.

WWD: What kind of Polaroid camera do you have?

G.H.: It’s kind of a new one. You can literally just buy it at Urban Outfitters. But the film is actually more clear than old Polaroid film, so it just was nicer for what we’re trying to do. Just the lines and everything are sharper, and it has more light settings.

WWD: Do you have a collection of cameras yourself? Or any other favorite ones?

G.H.: I have a Canon. My first was the Rebel XTi — that’s the one I did all my horse pictures with when I was kid. I thought it was very cool. That’s why I remembered the name, because I was like, ‘Yeah, Rebel XTi — I got it for Christmas.’ I thought it was so cool, it was my favorite thing. You can buy [the Polaroid camera] at Urban Outfitters, it’s so funny. And the film is so big, that’s the thing. At the British Fashion Awards, I had that massive camera and the massive Polaroids — it’s just a lot to carry around in a ballgown.