The artist's solo exhibition of new work is on view at Marianne Boesky Gallery in New York.

The title of Gina Beavers’ solo exhibition, “World War Me,” tracks back to “Sex and the City.” A “SATC” meme, to be specific. Carrie Bradshaw — perennially mining her life for content — sits pensively in front of her laptop, contemplating the theme of her next column. Beavers was drawn to a version of the meme paired with the text: “And as our country entered World War III, I couldn’t help but wonder… is it time to focus on World War Me?”

“[World War Me] refers to this way of existing in which we’re being confronted with these massive global upheavals, right next to a picture of your friend’s dog,” says Beavers over Zoom from her art studio in New Jersey.

Beavers mulls selfie culture, memes, fan art, food and political engagement in her exhibition of new work at the Marianne Boesky Gallery in New York. Her art takes the shape of large sculptural paintings with an uncanny photorealism. The square shape of her canvas references Instagram, and she uses thick layers of paint and foam to create a 3-D textural quality to the images.

Beavers is interested in exploring how imagery is transformed and inhibits new meaning when it lives in the online space. In the past, the artist sourced inspiration for her work from popular Internet content: images under hashtags like #foodporn, and makeup tutorials. “I’m taking these images and reinventing them,” she says, likening the impulse to remake and comment on other people’s images as that of a documentarian. But when the images she wants to create don’t already exist, she has to create them herself using her own photography; her body — her lips, her face, her hands — became the canvas on which to layer her ideas.

“Can I use these pop cultural tropes and transplant them into a painting, and do they read as the meme, or as something additional?” she says. She describes “World War Me” as her most self-referential show yet. Which raises more questions that Beavers can’t help but wonder: is self-involvement and the constant rumination of self-image problematic? And is there universality to be found in reading someone else’s image, specifically Beavers’ exploration of self?

The easy answer is yes; the question of self-image in the social media sphere is relatable, now more than ever. Beavers conceived of the show before COVID-19, though the work finds new relevance within the current moment. The artist has witnessed an uptick in selfie photos over the past months, a response to people being relegated to living their lives and connecting with others in the digital sphere. Not to mention, people are facing their self-reflection over Zoom.

Pop culture and political references are woven throughout the show: there’s the Maurizio Cattelan banana from Art Basel, turned into nail art for “Duct-tape Banana Nails.” There are “I voted stickers,” displayed provocatively in a painting of a woman lifting up her shirt. In others, she pays homage to famous artists by re-creating elements of their works on her lips — Beavers refers to these as a form of fan art. Also, a form of self-reflection. “Staring at yourself or your lips for hours is pretty jarring. But I like it, because it creates this whole other level of self,” she says. 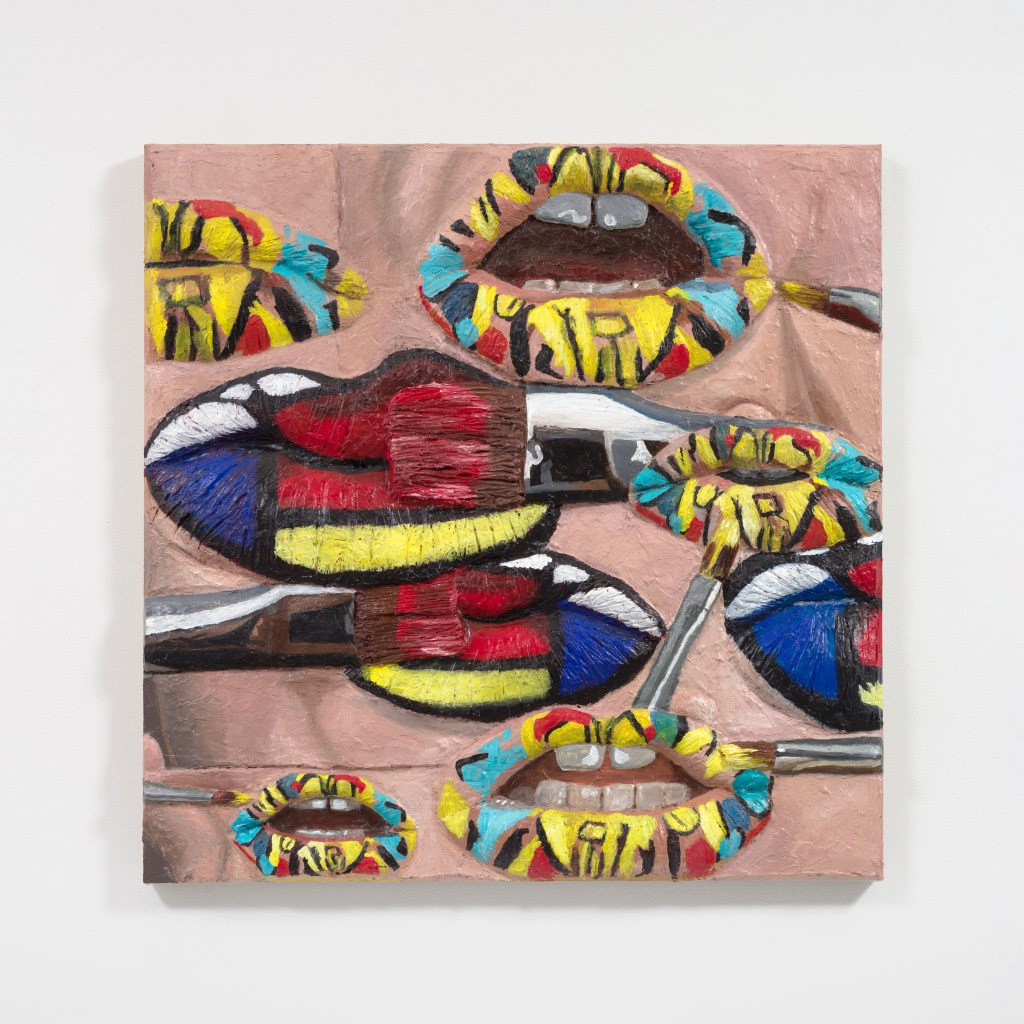 Beavers was also inspired by Jia Tolentino’s essay collection “Trick Mirror.” “She has a whole part in there about how women specifically navigate social media really seamlessly, because we’re so self conscious to begin with,” says Beavers. “We’re made that way by culture, always looking at ourselves from outside and we just thrive in this space. When we’re not being, you know, attacked by trolls.”

The surreal elements in Beavers’ work will be familiar to anyone who’s browsed the filters on Instagram or Snapchat. In one work, “People I Admire: Mike Kelly, RuPaul, Obama, Elaine de Kooning, Madonna” she painted five pairs of eyes onto her own image. On another, “Self-portrait with ‘Burger Eye 2015′” she layers an Instagram post from her feed over one eye, painting it in the style of a hamburger.

Despite the focus on makeup, Beavers, like many, isn’t wearing much these days: there’s nowhere to go, and lipstick is obscured by masks anyways. “Speaking of, all I’m seeing is my terrible lighting and like,” says Beavers, reflecting on her image within the Zoom window. “I have so much pent-up fashion and makeup energy,” she adds. “When this is over, I’ll just be like, you know, coming out in like eight-inch platforms…it’s like we’re all at a Phish show or something all the time, you know?”

Who knows what Bradshaw would have made of the social media selfie culture that would blossom in the decade-plus following the show’s finale. Safe to say, we all can’t help but wonder when it’ll be safe to take the mask off. 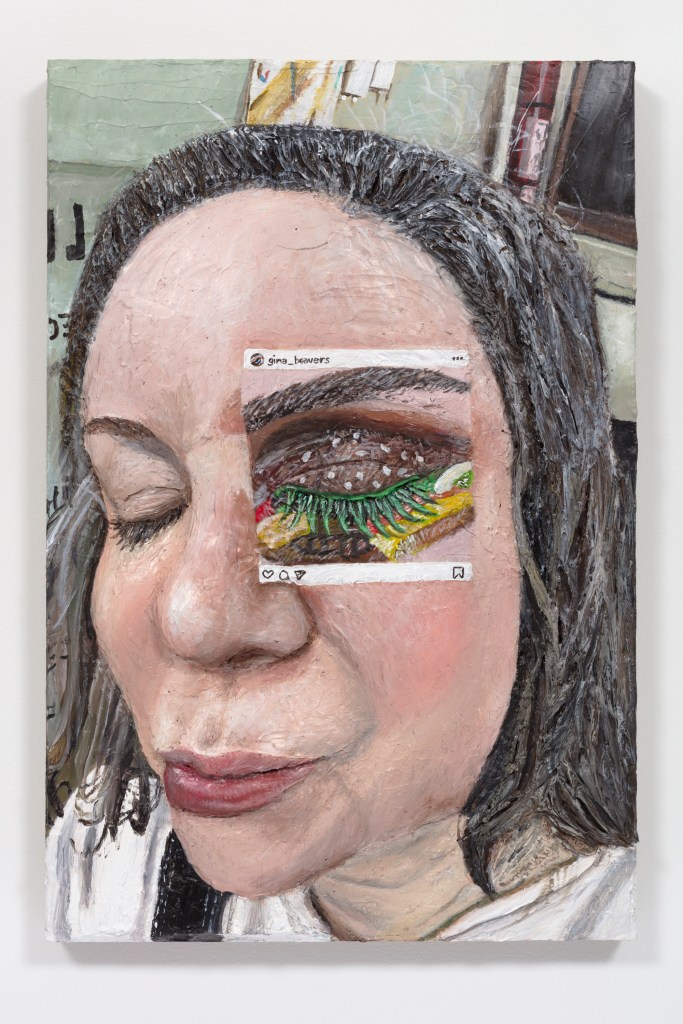