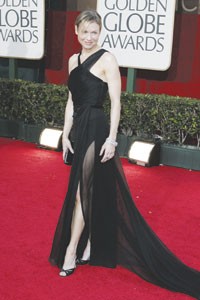 BEVERLY HILLS — Forget the winners and losers in the fashion stakes at Monday’s Golden Globes. The main chatter was about Reese Witherspoon‘s vintage Chanel dress. Beautiful? Certainly. So much so that Kirsten Dunst wore the exact same gown to the Globes three years ago.

A flustered Witherspoon — who won the best actress award for her portrayal of June Carter in “Walk the Line” — was seen asking Chanel president Maureen Chiquet at a post-Globes bash why she was never told the haute couture dress had already had a public outing.

Chiquet could not be reached for comment Tuesday, having already left for New York. But by early afternoon, the company e-mailed the following to WWD: “A Chanel dress never goes out of style. It is timeless.”

And that’s sure one popular party dress. “Funny enough, I tried on the ‘Reese dress,'” admitted Anne Hathaway at another post-show party, apparently unaware of the Dunst link. “When I put it on, I couldn’t even zip it up, and I thought, ‘Some short, skinny girl is going to wear this dress.’ And then Reese Witherspoon appears in it. She looked divine.”

Perhaps Witherspoon can take solace in the fact she wasn’t the only starlet to reprise a Chanel fashion à la Dunst. Natalie Portman looked every bit like Audrey Hepburn with those strong brows, the cropped hair and her strapless black lace Chanel Haute Couture dress. She also reminded some “Spider-Man” fans of the engagement scene in the 2004 sequel, where Dunst appears in the same dress. Chanel said Portman’s dress surfaced in the Fifties, while Witherspoon’s bowed sometime after 2000, although on Tuesday the house’s representatives would not specify the season.

Maybe the Witherspoon fracas caused Chanel to overlook another star it clad for the evening: Mariah Carey. Karl Lagerfeld designed a siren couture gown specifically for Carey at the request of André Leon Talley, who is orchestrating the pop star’s makeover. Talley apparently went straight to Lagerfeld for the look — and sources said the designer delivered against the advice of in-house publicists. The happy diva proudly declared it was Chanel Couture to all who cared, yet Chanel didn’t mention her in any post-Globe releases. It took two requests regarding the matter to Chanel to confirm that Carey did, indeed, wear Chanel.

Thankfully, house favorite Vanessa Paradis brought balance back to the universe in her silver Chanel sheath from the cruise 2006 collection.

The major Americans were represented as well, but to a much lesser degree. Mandy Moore looked lovely in Ralph Lauren, as did Hathaway in Marc Jacobs and, at the parties later, Mary-Kate Olsen in Michael Kors. And Donna Karan scored with best-supporting actress winner Rachel Weisz with the couture gown she made for the five-months pregnant brunette. “They left enough space for my belly to grow, which was very sweet,” said the wackily coiffed Weisz. “I think it’s kind of a feminist dress. Not hiding things but showing it. Do you know what I mean?”

No nonsense was also on Sarah Jessica Parker‘s mind when she chose her Rochas gown. “I just wanted a beautiful, simple black dress,” she said.

Some would have been better off heeding such a tip. Color has its place, but the va-va Escada number winner Geena Davis squeezed into recalled a fire engine — and not just the color. On the flip side, red-headed Marcia Cross looked washed out in the coral jersey Marc Bouwer halter gown. And Alanis Morissette bombed in that strapless concoction by her pal, costume designer Leesa Evans.

It’s unlikely those dresses will be recycled on the red carpet any time soon.