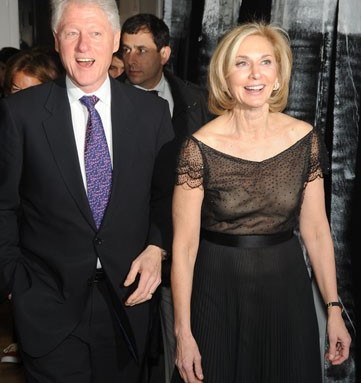 Divide and conquer, the Romans believed, and, as the saying goes, when in Rome…(or Milan, as the case may be). So on Monday night, while Naomi Watts was in Italy attending the Dolce & Gabbana show, her husband, Liev Schreiber, was in New York City at the Tribeca Ball. The couple were honorary chairs of the annual event, which benefits the New York Academy of Art and kicked off with studio tours on all five floors of the school.

“This is more exercise than I’ve gotten in a year,” joked designer Jason Wu, who gamely clambered the stairs to the top along with guests like Jennifer Creel, Heather Mnuchin and Monet Mazur. He was rewarded for his efforts: He found three artists that he was interested in.

Meanwhile, Schreiber met up with new Manhattan transplant Justin Timberlake to examine some of the more outré exhibits, including a pair of live models whose bodies guests were invited to paint on and decorate with broken eggshells.

Though Timberlake left early, others joined the chairs, including Andre Balazs, artist Will Cotton and Eileen Guggenheim, for a dinner complete with decoration made by the students. For dessert, there was a surprise few anticipated: an appearance by Bill Clinton.

His presence caused more furor than any amount of Champagne ever could among the group of usually blasé New Yorkers. As guests crowded around him, snapping photos with iPhones and cell phones, Clinton gladly shook hands and posed. “It looks different than last time I was here for the Tribeca Film Festival,” he said, looking around at the décor. Of course, most of the guests, especially the women, were staring at him, not the decoration.

His Secret Service detail were the only ones who were not in a tizzy. Said one, “That guy’s a chick magnet.”