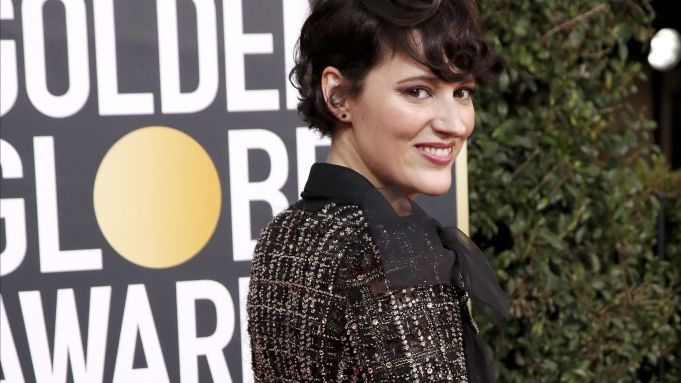 It’s been two years since Hollywood’s red-carpet blackout, when female stars wore all-black to the Golden Globes to show solidarity with the #MeToo movement, and Time’s Up pins were the hot accessory.

But at the 2020 Golden Globes on Sunday, on the eve of Harvey Weinstein’s trial, at an awards show where female nominees were entirely shut out of the Best Director category, the only statement on the red carpet was pure fashion.

It is a new decade after all, and maybe the idea is to look forward, not dwell on the past — or even the woes of the present, Australian wildfires and Iran threat among them.

Hollywood can always be counted on for escapism and we need it now more than ever. So bring on the puffy sleeves (“Booksmart” star Kaitlyn Dever in a lush floral lace Valentino and Dakota Fanning in a lavender princess Dior gown); pastels (“Fosse/Verdon” actress Michelle Williams in creamsicle Louis Vuitton and Cate Blanchett in a lemony yellow Mary Katrantzou sun pleat goddess gown), and everyone’s perennial favorite red carpet red (“Bombshell” actress Nicole Kidman in a hip draped Versace, and Scarlett Johansson in a sultry, scarlet Vera Wang).

Never mind that there were some real clunkers — Taylor Swift in an Etro gown resembling wallpaper; Gwyneth Paltrow in a Fendi caramel-color tulle bra situation, and J.Lo gift-wrapped in Valentino like a leftover Christmas present.

Gender-blending styles, which could be read as a kind of detente between the sexes I suppose, made a big impact. One of the night’s major trends was tuxedos, or “sex-edos,” as stylist Law Roach calls them.

Phoebe Waller-Bridge looked like the boss actor-writer-director triple threat she is in a Ralph & Russo beaded tuxedo with a new gamine hairdo and Awkwafina’s Dior tuxedo dress with frilly bow collar was fresh and elegant. Cynthia Erivo paid homage to her corseted character in “Harriet” with a corseted Thom Browne tuxedo gown with pearly neckline and peony details (Erivo’s favorite flower). It was couture that felt oh-so-personal.

“She is so inspiring because the quality of the work comes first,” Browne said of the star, though he just as well could have been describing his own approach. The embroidery on the gown took 11 people 800 hours. Wow.

Billy Porter bookended his famous tuxedo-gown hybrid from the 2019 Oscars with a custom white tuxedo with detachable feather train by designer Alex Vinash. “I’m fascinated by how the meaning of a tuxedo has evolved over time,” Porter’s stylist Sam Ratelle told WWD. “Plus, Billy loves trains and capes. He said, ‘I just want to look like André Leon Talley all the time!’”

The color white was meant to represent “peace and hope, which given what’s happened in the last couple of weeks, is something we want to push,” added Ratelle. Indeed.

Roach dressed Kerry Washington in an Altuzarra pre-fall “sex-edo” that involved a crystal body chain, side-slit skirt and blazer. It was hot — and came together in just a couple of weeks, Roach said, after Altuzarra’s team originally passed. (The dress was already in production, but the Altuzarra team was ultimately able to make things work.)

All of the big fashion brands were represented, natch. But it was a great night for Chanel, kicking off the first red carpet season since Karl Lagerfeld’s death. The couture looks by artistic director Virginie Viard shined with a new approachability. Exhibit A: Margot Robbie’s stunning multicolored embroidered bustier and ivory satin crepe skirt — with pockets. With her beachy blonde waves, this was not your grandmother’s couture. “The attitude and ease is what I love about it,” said stylist Kate Young. Margaret Qualley’s strapless black dress with white camelia brooch was also casually elegant.

Iris van Herpen isn’t a name you see on the red carpet so much, which is why it was such a brilliant call for up-and-comer Joey King to wear it. Against red carpet vets like Blanchett, Kidman, Paltrow and more, she was able to make an outsized impression by choosing the fashion futurist’s black-and-white, optic illusion gown, and people couldn’t stop staring at it and posting about it.

“It was her moment to shine,” said stylist Jared Eng of the Best Actress in a Miniseries nominee. “Joey has such a unique and quirky personality, we wanted to reflect that….” Now that’s 2020 vision.

Every Red Carpet Look From the 2020 Golden Globes

WATCH: Getting Ready For the 2020 Golden Globes With Ambassadors Paris and Dylan Brosnan