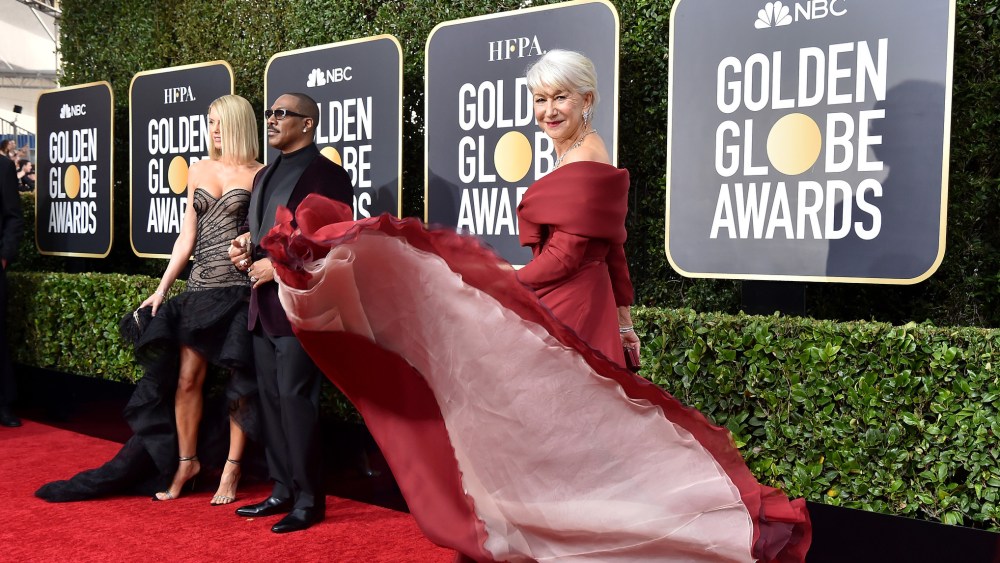 “Now that the Globes are back, let’s have fun,” said stylist Jennifer Austin.

The fashion world seems ready for the first major red-carpet moment of the year when the award show returns Tuesday. And while there may be a slight shadow looming over the carpet, the industry is looking forward.

“The strides that they made and changes that they made were good,” Austin continued, of the Hollywood Foreign Press Association. She’s dressing Angela Bassett, nominated for Best Supporting Actress in a Motion Picture for her role as Queen Ramonda in “Black Panther: Wakanda Forever.” Still, she added, “We’ve got a long way to go.”

After facing backlash for its operational standards and lack of diversity (previously having zero Black members), the HFPA held a private ceremony in 2022 with no stars and no carpet. Some have boycotted the show, or even given their Golden Globes back, and it was unclear who would show up this year until recently. Turns out Hollywood seems ready to move on. Presenters will include plenty of A-listers — Ana de Armas, Billy Porter, Tracy Morgan, Jamie Lee Curtis, Quentin Tarantino and Natasha Lyonne. And some headline-making names are also expected, including Rihanna and Selena Gomez.

“It’s a time of change,” said stylist Cristina Ehrlich, who’s dressing Lyonne. “As much as it’s a very difficult time in the world right now, fashion’s job is to deliver beauty and optimism and glamour and fantasy.”

For the leading stylists, prepping for the upcoming show isn’t any different from years past. For one, it’s always been a bit frantic and rushed due to timing, coming days following the holiday break.

“It’s a strange one because it always comes really quickly after Christmas,” said Rose Forde, stylist to Emma D’Arcy — who’s nominated for Best Television Actress in a Drama Series for “House of the Dragon.” “The Globes is historically, from a styling perspective, always a little tricky.”

“Because it’s so early, I have to plan it early,” said Kate Young, who is dressing Gomez, Margot Robbie and Michelle Williams — all nominees. “It’s something that has to be planned before the holiday.”

At this point, the international brands know “to have a lot of their stuff ready to go in New York or L.A.,” said Ilaria Urbinati, who’s also dressing all nominees — Donald Glover, Adam Scott, Barry Keoghan, Damien Chazelle and Diego Calva.

A new challenge, however, has been shipping issues; most companies are now undependable, and costs have skyrocketed, making it more difficult to receive samples.

“We’ve had to switch to using Worldnet [International] instead of FedEx or UPS….They hand carry packages, and it’s a lot more money,” Urbinati said. “Regular shipping companies have just become completely unreliable since COVID-19. We’ve lost more things this year from shipping than any other time in my career.”

“You’ve got to be a little more selective,” Austin said of receiving samples, due to costs.

This year at the Globes, Bassett will be in “something simple, but different,” Austin revealed. “It’s going to be a different silhouette for her. It’s a build-up. We’re all building up to the Oscars. You have to have a plan of attack. You start off high, continue high, but your crescendo are the Oscars.”

How do the Globes compare to the other award shows today?

“With Globes, it’s formal,” Young said. “It’s super formal. It’s more so than a premiere, maybe less than the Oscars or Cannes.”

“For me, Globes is huge,” Urbinati said. “Golden Globes and Oscars are the two big ones. Let’s put it this way, if I’m having a guy who’s going to all of those award shows, Globes, Critics, SAGs, Oscars, etc., I’m always going to save the best two outfits for Globes and Oscars because they just get the most visibility.”

A major shift on the red carpet, the stylists echoed, is how over-the-top the looks have gotten — seemingly for the sake of attracting attention.

“To be honest, I think with all of the ceremonies over the last couple years, it’s kind of gone wild,” Forde said. “Increasingly, recently, there’s a kind of fight for the space, a fight for coverage and a fight for attention. There’s so many people trying to say so many different things and have so many fashion moments. I’ve always tried, with every ceremony I work on, to ensure that my clients just looked cool and relevant and themselves…but I’m also not going to go for the biggest fashion moment unless it’s got real sincerity behind it.”

When it comes to menswear, there are now less rules to break on the carpet, Urbinati said: “It’s more challenging but also fun trying to figure out how to do something that feels unique and surprising and special in a world where everyone’s wearing crazy s–t.”

While showcasing designers that feel of the moment, stylists are looking to provide looks that are natural to the evolution of their clients’ personal style and career, so there’s some storytelling.

“I would be interested to see, from a styling point of view, what people are going to do,” Forde said. “Are people going to really push it? Are they going to be a little more reserved this time?”

“Looking at the people that are nominated, just going right down the list, whether we’re looking at Viola Davis or Ana de Armas or Margot Robbie, Michelle Yeoh, I can pretty much say that she’s going to wear this brand or that brand,” said Ehrlich of Best Actress nominees, referring to the relationships brands lock in with talent.

Robbie, reportedly released from her contract with Chanel, has been wearing Celine, Bottega Veneta and Alaïa lately. Armas, a rising star, wore an Oscar de la Renta dress for a late-night appearance on Jimmy Fallon’s show, but at the Governors Awards, she opted for Louis Vuitton. Meanwhile Davis, dressed by Elizabeth Stewart, wore a custom Christopher John Rogers gown to the ceremony and was recently photographed in custom Tory Burch. Yeoh, who will be dressed by Jordan Johnson, has been seen in Elie Saab, and Thursday night at the Palm Springs International Film Festival, she wore Schiaparelli.

“I think there’ll be the people that go really out there and have plunging necklines and plunging back lines, and then I’m hoping, because I think it’s time, that we’ll see a little bit more of the old Hollywood classic,” Ehrlich added.