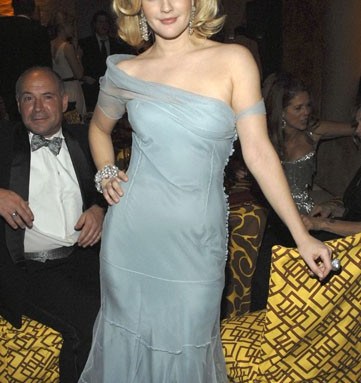 The Golden Globes after parties were rather lackluster this year, as most of the A-list made their exit minutes after 10 p.m.

Back at the Beverly Hilton, Kate Winslet, Blake Lively, Heidi Klum and Marisa Tomei lounged in the VIP section of the In Style/Warner Bros. bash held in the tented garden courtyard. Guests also ogled Leonardo DiCaprio, who stayed for over 30 minutes, perhaps the longest anyone, let alone a nominee, settled anywhere.

It was mostly execs and “Mad Men” cast members who huddled at AMC’s intimate soiree in the penthouse. About 75 people whooped when show creator Matt Weiner bussed his wife while clutching his statuette for best television drama. “All good, all good,” said Jon Hamm, who shook hands with friends and strangers alike. Still, the party was more like a moody “Mad Men” set piece than an all-out celebration.

However, HBO, which also had plenty to toast with big wins for “John Adams,” “In Treatment” and “True Blood,” set a festive mood at its Sixties-themed poolside shindig. Outside the party, the lengthy line extending down a hallway suggested it was the post-ceremony event of the night. The dance floor was perilously close to the water’s edge, but that didn’t stop many from getting their groove on. Jenna Fischer and Angela Kinsey from “The Office” eschewed the Sixties and channeled the next decade by doing their best coordinated imitations of John Travolta in “Saturday Night Fever” to Michael Jackson’s “Don’t Stop ’Til You Get Enough.” Meanwhile, Amanda Bynes, sitting next to Jamie-Lynn Sigler and Hayden Panettiere, wiggled in her chair to Beyoncé’s “Single Ladies.” Bynes had been partying since early that afternoon. “It was my grandma’s 90th birthday,” she said. “I had that earlier in the day, and then I ran over to my house and got ready in 20 minutes, and did my makeup in the car.”

Nearby, Sophia Bush struggled to make a phone call as the beats thumped. “I feel like I’m on the Verizon commercial. ‘Can you hear me? Can you hear me?’” she pleaded into the phone. “It’s like a dance club in here.” This being the HBO party, plenty of cable cast members from past and present did the rounds. Drew Barrymore showed up, as did Mark Wahlberg and those in his “entourage,” including Adrian Grenier, Kevin Dillon, Kevin Connolly and Jerry Ferrara. Zac Efron, Tom Hanks and Ginnifer Goodwin were also on hand. “The most attractive people in the world are here,” said Goodwin. “I’m an imposter, but no one has busted me yet.”

The bash Fox Searchlight had at Craft restaurant drew the entire cast of its “Slumdog Millionaire,” as well as Mickey Rourke and Bruce Springsteen, who both nabbed Golden Globes for its other big winner, “The Wrestler.” Over at the NBC/Universal/Focus Features shindig on the roof of the parking structure at the Beverly Hilton, Olivia Wilde, Jane Krakowski and Colin Farrell mingled among the displays of vintage baubles provided by Cartier, the event’s sponsor. Anne Hathaway made a brief appearance at the bash, but in the end, the best celeb spotting was to be had in the hotel lobby (winners Tina Fey, Tracy Morgan, Laura Dern and Anna Paquin) and the valet line. As one partygoer put it, “I think there was a secret party somewhere else and we didn’t know about it.”