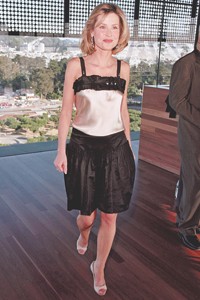 Donna Karan swept into San Francisco last week to present her Nordstrom-sponsored fall collection at the remodeled de Young Museum. It was the first fashion show held there since it reopened last October, but Karan had no problem reeling ’em in. She was surrounded by a flock of very well-put-together admirers, among them Danielle Steel, Denise Hale, Alexis and Claiborne Swanson, Katie Traina, and Kate Harbin. Karan looked peppy and fresh herself, which was a little surprising given that she’d just flown cross-country. Perhaps it had something to do with the salad lunch she’d eaten, which was sent in from the downtown vegetarian-organic restaurant Medicine Eat Station.

“I’m trying to stick to my vegetarian diet,” Karan explained. “But a girl does want a steak every so often.”

Next up on her agenda? “I’m going to a yoga retreat at Begawan Giri,” she said. “I’ll be taking yoga classes with my family. I’ve got to get strong enough to hit the slopes again this winter.” Brave soul, since in recent years she’s broken her leg twice skiing.

The first was for “Allegro,” a very highbrow Danish psychological drama that stars Helena Christensen. “At first, I was a little worried,” Saffir informed the crowd at the Tribeca Grand last Wednesday. “When I put it in the VCR, I thought, what if the movie’s really bad? What if Helena can’t act?”

He was pleased to discover otherwise. Christensen, for her part, had this to say about critics who reflexively write off models-as-actresses: “I think that cliché has gotten a little old.”

A rainy few nights later, Saffir’s crowd headed to the Southampton movie theater for the premiere of “The Groomsmen,” the new Ed Burns movie which stars (of course) Ed Burns. The evening, which was cosponsored by The Wall Street Journal, drew in Christie Brinkley and husband Peter Cook, Marjorie Raein, Jamee and Peter Gregory, Fred Schneider of the B-52’s and Pamela Hanson. As the lights dimmed, Burns scrambled in with wife Christy Turlington, who had the perfect rainy-day accoutrements — a ponytail and a bag of popcorn.

After the screening, the precipitation subsided and revelers headed to Allison and Chris Brown‘s beachside Gin Lane estate for dinner, drinks and some pre-Father’s Day fun. This included, among other things, a frozen margarita machine that was drawing fans. “Have you tried one of these?” asked Alex Kramer. “They’re lethal!”