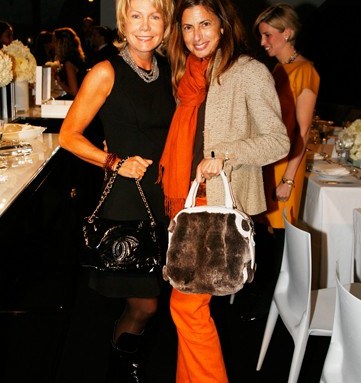 The Box isn’t generally considered a paragon of moral rectitude, but even the club’s notoriously stringent community board neighbors would be hard pressed to criticize the charity event held there Monday night.

Mike Myers, a Hammerstein family friend, emceed the affair but even he couldn’t ignore the elephant in the room. “The last time I saw Simon get behind something like [Only Make Believe], it was in the back of a bus with an adult film crew,” the comedian said.

But if Allen and Lauren seemed an odd pair, what about Maya Angelou and rapper Common, who performed at the first Edmont Society Affair that same night benefiting PEN’s Readers & Writers program? The octogenarian poet couldn’t help but bat her eyelashes at the much-younger hip-hop star. “Such a handsome young man,” she cooed as she took the stage at the Friars Club, drawing laughter from the crowd, which included Sobieski, Vanessa Carlton, Elise Overland, Maggie Betts and hosts Derek Anderson and Victor Kubicek.

Common took everything in stride: “That someone so great even knew who I am was amazing. When she did the flirty stuff I thought it was funny,” he said, grinning, as he took his seat at the dinner afterward in The Plaza’s newly renovated Oak Room.

The next day, socials including Christine Schwarzman, Kalliope Rena, Fabiola Beracasa and Muffie Potter Aston trekked through Central Park in torrential rain for a Chanel luncheon at the brand’s Mobile Art exhibit, cohosted by the Central Park Conservancy. Before two Premiere Ceramic watches were raffled off, guests anxiously confirmed with Chanel staff that their names had been entered in the drawing (these days, even socialites aren’t shy about wanting something for free). Lisa Blau and Amanda Brooks were the two who went home with the $5,850 prizes.