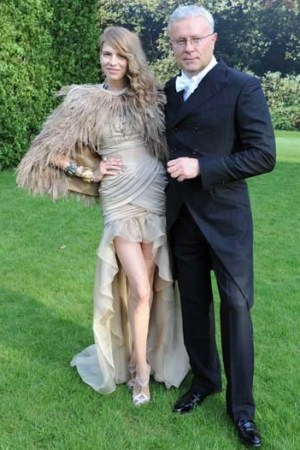 A hoard of British celebrities flocked to Alexander Lebedev’s home on the grounds of Hampton Court Saturday night to help raise serious sterling for the Raisa Gorbachev Foundation, which aids Russian children with cancer, and the Marie Curie Cancer Center.

He needn’t have worried. Guests including Vanessa Redgrave, Joely Richardson, Matthew Williamson, Anjelica Huston, Sabrina Guinness, Goga Ashkenazi, Nick Rhodes, Dougray Scott, David and Catherine Bailey, Dinos and Tiphaine Chapman and, of course, Mikhail Gorbachev gathered on the fragrant front lawn of The Stud House to soak up the summer evening rays, have a laugh, and listen to the London Oriana Choir singing Rachmaninoff’s “Vespers.” And among such a decked-out contingent, naturally talk among the ladies turned to fashion.

Dorrit Moussaieff, Iceland’s first lady, was so enamored of a white Osman Yousefzada gown worn by stylist Joanne Black that she ended up buying her own on the spot. “I’ve just taken an order,” said the designer.

“This dress has got it all going on,” said Black, kicking a long leg out of a high slit.

Meanwhile, shopping of another sort was on Emily Oppenheimer Turner’s mind. “We’ll be leaving with one of the Bacons,” she said within earshot of her husband, Will, referring to the lithographs that would go up for auction later that night.

Evgeny Lebedev, Alexander’s eldest son, slapped down 90,000 pounds, or $131,000, for a series of signed Francis Bacon lithographs, while Richard Caring paid 220,000 pounds, or $319,000, for a Marc Quinn painting and an anonymous buyer outbid Hugh Grant for a David LaChapelle photograph, with the auction’s final tally reaching 1.7 million pounds, or $2.5 million.

Dinner was served in a tent made to look like a church with a floor-to-ceiling wall of stained glass and a patterned ceiling reminiscent of St. Basil’s Cathedral in Moscow. Afterward, Bryan Ferry, Simon Le Bon and the Russian soprano Anna Netrebko performed before DJs Mark Ronson and Jefferson Hack took to the decks well after midnight.

“One thing’s for sure,” said Claire Forlani, “Gorbachev keeps the glamour quotient high.”