Dustin Lance Black has written "Milk," the much-buzzed-about biopic about gay rights activist Harvey Milk who was tragically murdered in 1978. 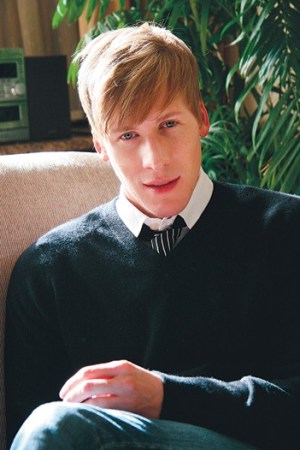 It’s been said Proposition 8 might never have been passed in California were it not for the relentless campaigning of the Church of the Latter Day Saints, which helped bankroll the fight against gay marriage in three states this November.

But if so, one lapsed Mormon may get the last laugh. His name is Dustin Lance Black, and after working

as a writer for the last three years on the HBO series “Big Love” (about a polygamist Mormon family), he’s written “Milk,” the much-buzzed-about biopic about Harvey Milk, the San Francisco city official and gay rights activist who was gunned down in his office in 1978.

A day after Natalie Portman, Parker Posey, Barry Diller, Diane von Furstenberg and Marc Jacobs stormed the Sunshine Cinema for the film’s New York premiere, the 29-year-old screenwriter sat down with WWD to discuss his upbringing, the man he just wrote a movie about and why James Gandolfini’s praise means more than anything.

WWD: Tell me about growing up Mormon in Texas.

Dustin Lance Black: It was this hidden community, a lot of military families and really patriotic. I knew from a very early age that I was gay. Some kids growing up in other places might not understand the feelings they’re having and think, “Oh, wow, I’m a little different but I’m not sure how.” But in San Antonio, you hear all the words people use, and that’s really tough.

WWD: How did you get from there to writing about Harvey Milk, which you conceived, wrote and then sold?

D.L.B.: I got really lucky. My mom got remarried to a Catholic guy who was really cool. I was a teenager, and he moved us to the Bay Area. We were stationed at Fort Ord, but I would escape to San Francisco, where I got into the theater scene. One day a teacher told me and a small group the story of this out gay man who was honored by his city. I don’t know if someone had said something homophobic or that he sensed that I needed to hear this story. But it was shocking to me, because I always thought if you came out of the closet you must be suicidal.

WWD: You mean, because unless there was nothing to lose, there’d be no reason to come out?

D.L.B.: Yes. I don’t think I was immediately identifiable in junior high. But I watched what happened to kids that were and I didn’t see why you would ever volunteer to be treated like that. It was shocking that there was a place in the world where you could do that — come out — and they would throw you a parade.

WWD: Let’s talk about the term “immediately identifiable.” Did you worry that a movie about a self-described “queer as a three dollar bill” activist might be a harder sell than one about a couple of cowboys who are as American as apple pie?

D.L.B.: I approached the story as a spec script. There was no studio, there was no one to answer to whose money I had at risk. So I was able to approach it fearlessly and show the Castro for what it was in 1978. Then I got this stroke of luck when Cleve Jones [an AIDS activist and protégé of Milk] showed the script to Gus Van Sant. But even later on we never got a note to quote-unquote sanitize or Hollywood-ize these characters. And some of them are pretty out there.

WWD: Could you ever have imagined that the movie would be coming out at a time when gays and lesbians are newly galvanized by the passage of Proposition 8 in California?

D.L.B.: No, of course not. But I started writing this during the 2004 election, when the President fought for reelection by pitting homophobes against gay people. So the vote for Proposition 8 is not so surprising.

WWD: Still, have you considered that it might not hurt the movie’s prospects at the box office?

D.L.B.: I don’t really understand how a movie succeeds or fails. And I think it’s a really good movie. And I’ve watched really straight people cry. James Gandolfini said last night that he loved it. That’s really exciting to me.