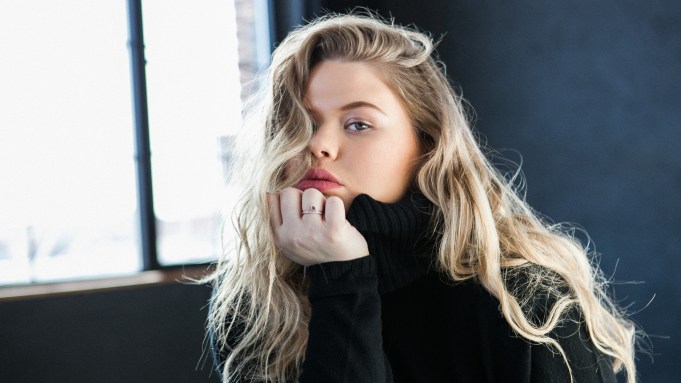 Lesley Gore’s 1963 ballad “You Don’t Own Me” has had many lives. The feminist anthem was an instant hit, taking the then-17-year-old Gore to the number-two spot on the Billboard chart (second only to The Beatles). Decades later, it was belted out by Bette Midler, Diane Keaton and Goldie Hawn in the 1996 film “The First Wives Club;” later sampled by Eminem on his 2010 track, “Untitled,” and in 2012, was lip-synced by Lena Dunham, Carrie Brownstein, Natasha Lyonne and Miranda July in a video addressing Mitt Romney’s stance on Planned Parenthood.

And for Grace, the 18 year-old singer-songwriter heralded as Australia’s answer to Adele, it might just be her ticket to the big-time.

“I figured out I could sing early on,” the girl simply known as Grace (she lopped off her surname, Sewell, professionally) says, sitting in a makeup chair in an industrial photo studio in Brooklyn. “And I just ran with it.”

She grew up in a family of singers, listening to “big powerhouse soul singers like Aretha Franklin, Etta James, Smokey Robinson, and Chaka Khan,” she says. Her older brother, Conrad Sewell, is another on-the-rise musician who won Song of the Year at the 2015 ARIA Music Awards. “I started writing music when I was, like, nine or 10, and he was already playing shows and out there, trying to make his dream happen,” Grace says. “I grew up watching him, and he was a big part of why I got into it, I think.”

She spent time between the U.K. and Australia in her childhood, going to London yearly to visit with her father’s family and, when there, doing vocal sessions. It wasn’t until she finished high school, though, that things really took off. “I had a couple months after I left school where I didn’t have anything going on but I knew I wanted to do music,” Grace says. “I had a manager, I was writing all the time, I had songs and I wanted people to hear them, but didn’t know what to do next.”

One of the songs she wrote in the months following school, “Boyfriend Jeans,” caught the attention of her manager. “I just wrote it in my bedroom and made a crappy demo on Garage Band,” she says. “And within two weeks I was here in the States showcasing for all these major labels.”

She signed with Sony and just before her 17th birthday moved to Atlanta, where her manager is based, with her sights set on making it big in America. “Not that you can’t do it from Australia,” she says. “But really — it sounds bad — but if you break America, you break the rest of the world.”

Giving her a major push toward that break is Quincy Jones, who produced “You Don’t Own Me” with Gore in the Sixties and, as luck would have it, happened to be friends with Grace’s manager. “One day my manager was at Quincy’s house, and he asked Quincy, ‘If we were to remake one of your records, what would you suggest’?” Grace says. “I think he’d heard a few of my records, and I think just hearing my voice, and the fact that I was around the same age as Lesley when she recorded the song, he obviously felt that that was a message that needed to be heard by a younger generation. And that was a year ago.”

The process was expedited when Gore died from lung cancer in February 2015. “Quincy was like, ‘Now we’ve got to put this out as a tribute,'” Grace says. “And within a week of him saying that, it was out. When Quincy speaks, everyone jumps.” Her version features a verse by rising Oakland rapper G-Eazy, and admittedly took many attempts to get right. “It didn’t start as a tribute, and it wasn’t meant to be a single, it wasn’t meant to be anything,” Grace says. “It was really just meant to be put out in her honor, and we’d see what happens.”

The young vocalist’s version topped both the Australian and British charts, and she found herself churning out an EP, booking American TV appearances and gearing up for a full-length album release. “Some people don’t even know it’s a cover,” she says of the song. “People just connect with it, I guess, because the message is timeless.”

The resulting EP featured many of those bedroom Garage Band demos. “It’s about, like, getting in trouble with your parents and having a crush on someone,” she says. “So it’s really young — not that I’m that much older now. I’m only 18. But my whole life has changed massively since I was 16.” Her goal is to emulate the instrument-focused ballads of her female powerhouse inspirations, instead of production-driven pop. “As a little girl, the people and the women around me were always very inspiring and pushed me, and gave me the mentality that anything is possible.”

She’s writing all the music for the upcoming debut album, which is expected later this year. “When people try and play songs with me or when someone’s written a song and they want me to sing it, it’s always really hard for me to connect with it,” she says. Save for, of course, the one that’s taken her to the top. “‘You Don’t Own Me’ is the only one that’s worked,” she says.

She too is taking the message of “You Don’t Own Me,” into her music.”It’s hard to listen to that and sing along to that and not feel inspired, especially as a female,” she says of the song. “That’s definitely something I want — maybe not musically, my music isn’t necessarily motivational — but I’d hate to see young people feel like they couldn’t do something or be someone because of where they came from or what they look like.”

Aside from her own musical tastes being rooted in a generation past, Grace is hoping her sound-from-another-era approach takes with her peers. “Anytime someone remakes a record or puts a fresh spin on something, it’s great,” she says. “Kanye West is a perfect example of that. He opened up a whole new world of music to younger people who were listening to Kanye West but were really listening to Chaka Khan and frickin’ Shirley Bassey, and they had no idea.”