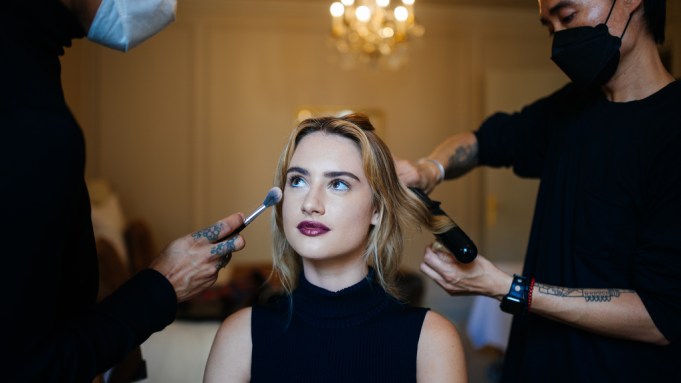 “It was epic,” says Grace Van Patten, almost at a loss for words following the Louis Vuitton show at Paris Fashion Week. The actress is calling from the car as she leaves the show venue, having arrived in Paris only the morning before for her one and only PFW stop. From her excitement, it was clearly worth the trip.

“It was a masterpiece with every detail — from the clothes to the shoes to the ambience,” she says. “It was very transportive.”

She took in the show seated next to her “Nine Perfect Strangers” costar and friend Samara Weaving, much to her delight.

“That was a nice surprise — we were squeezing each other’s hands throughout the whole thing,” she says.

Van Patten’s favorite look? “A leather dress, almost floor-length,” she says. “And I was obsessed with the shoes. They were sandal-like heels all in different materials and textures.”

Her own outfit was a little harder to summarize.

“How do I describe this? I’m wearing a jacket as a dress, and the bottom half is leather material, and the top half is this beautiful embroidered red and blue and gold material — it’s really gorgeous,” she says. “With big sleeves — very big sleeves.”

She’d done a fitting with LV back in New York prior to her trip, “and then it just magically appeared in my hotel room in Paris. It had its own plane ride.”

After the show, Van Patten is taking advantage of being in France by doing a trip with her sister, who is flying into Paris to meet her.

“She is the planner in our sister dynamic so I’m letting her handle it all,” she says of their plans.

Afterward, she’ll head to London, where her dad, director Timothy Van Patten, is at work.

“And as now my next job isn’t until end of December so I might ride it out in Europe as long as I possibly can,” she says.

The project is a Hulu series called “Tell Me Lies,” from Emma Roberts’ production company.