Talking with set designer Dante Ferretti, an Oscar nominee for "The Aviator" ... and the directors of Best Documentary pick "Born Into Brothels." 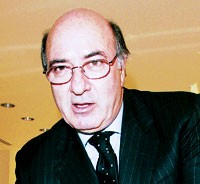 BEVERLY HILLS — Set designer Dante Ferretti’s oeuvre consists of some of the most dramatic cinematic works of the last three decades from “Medea” to “The Age of Innocence,”  and, most recently, “The Aviator,” for which he just received an Academy Award nomination. But a streak for injecting inside jokes into his sets is also a part of his signature.

“Nobody knows this,” Ferretti shares, his eyes twinkling, “but in the re-creation I made of the Chinese Theater [in “The Aviator”], I put a plaque of my own name and handprints. I thought this is my only chance to be at the famous Grauman’s. It was under the red carpet in the film. But for me, it was a joke on the set.”

Ferretti is entitled to some real estate on a Hollywood sidewalk, if not it’s hallowed Walk of Fame. The number of his credits on American, Italian and French films stands at 52. And it’s rising, since Ferretti sees no reason to let up. “I get bored,” he shrugs during a midday chat in the lounge of the Beverly Hilton. “It’s not that my life is boring. My job is my life.”

The professional and personal are, indeed, intertwined. Ferretti’s wife is Francesca LoSchiavo, a five-time Oscar-nominated set decorator. Their son, Edoardo Ferretti, is an assistant director whose credits include Martin Scorsese’s previous film, “Gangs of New York.”

Though Ferretti recently completed work on a film in the Czech Republic and is in preproduction for Brian De Palma’s “The Black Dahlia,” his recent weekend here marked the beginning of a four-month campaign to launch his first book, “Ferretti,” a gorgeous tome that chronicles his lengthy career.

Tod’s threw the set designer a party two nights before the Golden Globes. The company’s chief executive officer and chairman, Diego Della Valle, is a shareholder in Cinecitta Studios in Rome, headquarters for the bulk of Ferretti’s productions. As a result of the friendship between the two men, Ferretti began creating installations — Italian summer piazzas, the Tivoli Gardens, film set re-creations (“Pulp Fiction,” for one) — for Tod’s press presentations during Milan Fashion Week.

“I have always loved how clever Dante’s work is and his vision for making sets complete replicas of the actual scene,” Della Valle said in a statement.

Take the Grauman’s set in “The Aviator”: “The night we started shooting, [Miramax chief Harvey Weinstein] was standing in front of my Chinese Theater and said, ‘Dante, this is the real size.’ It wasn’t,” chuckles Ferretti. “I made the entire set a little bit bigger, because, I told him, ‘I’m more of a megalomaniac than you.’ It was a joke, of course.”

Still, Weinstein only heaps praise onto his frequent collaborator: “Dante has a magical ability to capture the essence of an era unlike anything I’ve seen before.”

As a child growing up in the Italian province of Macerata, Ferretti recalls how he always heard about this fantastical, faraway place called Hollywood. “I didn’t even put together that Hollywood was the same as Los Angeles. It was this dream place. And this became a dream come true with ‘The Aviator.’ I did so many films in the United States and have re-created many times part of the United States. But in this case, for a guy like me, who comes from Italy and grew up on this idea of old Hollywood, to be able to redo the Chinese Theater, the Coconut Grove, Howard Hughes’ house — re-creating the most glamorous moments in Hollywood history was the best.”