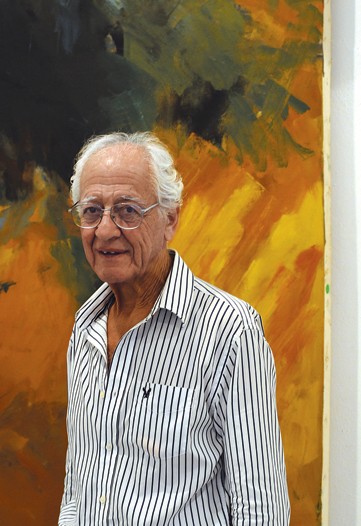 Demetri Gassoumis is a painter with a grasp of the power of place.

Since 1959, the 75-year-old Greek-American has been gypsying back and forth between his native California, New York and the picturesque, well-storied Greek island of Hydra, where his mother grew to womanhood. His family has roots on the island dating back to 1850.

What draws him to Hydra was recently put on colorful display when Gassoumis held a one-man show of landscape paintings in the island’s Melina Mercouri Auditorium and then took part in a group show held at a nearby museum. He has a strong following on Hydra, which has long been associated with artists and writers. Celebrated painter Brice Marden usually spends Augusts on the island and singer-songwriter Leonard Cohen still owns the house where he lived and worked as a poet in the Sixties.

When Gassoumis held his first show on Hydra in July of 2002, he received a glowing review from none other than Panayiotis Tetsis, who is from Hydra and whom many consider to be Greece’s greatest living painter. Describing Gassoumis’ work as “a very beautiful example of robust painting,” Tetsis, who is a professor of painting and dean of the School of Fine Arts in Athens, writes: “The integrity, strength and sensitivity of his paintings are his virtues.”

Some islanders, such as fellow artist Iris Kharami, talk in terms of Gassoumis following in the Hydriot tradition of top-flight landscape artists. Like Tetsis, Gassoumis uses deep, rich colors. In his latest show, the paintings capture the mood of the contemplative light seen around sunset and early in the morning, when earth tones are their most intense.

White-haired with a trim, agile frame, Gassoumis has a sharp mind and an easy, self-deprecating sense of humor. “Most people at my age are dead,” he shoots back when asked about his future plans, which involve setting up shop in Athens. “Obviously, I will have to do some paintings of the Acropolis because I’ll be in Athens—that will be a challenge,” he observes wryly.

Right now he’s doing more Hydra paintings (“Some really good, some so-so”), and he’s not alone. Judging from the ubiquitous art exhibits around the port, Hydra is a compelling spot for landscape painters. Rows of whitewashed buildings rise up the hillsides surrounding the harbor like a Cubist punch bowl. Instead of streets, there are thousands of steps and tiny cobblestone walkways snaking up the heights around the houses, some of them former mansions built by shipowners during Hydra’s maritime boom in the 1800s. Everything from tourists’ luggage to easy chairs and washing machines move up the steps on backs of trudging donkeys. Then there’s the crystalline blue sky serving as the ever-present backdrop for the even deeper blue sea.

Gassoumis’ connection with the island began when his father, a former villager from central Greece, arrived from America, where he acquired U.S. citizenship, thanks to his service in World War 1 and a new name of Mike, courtesy of an immigration official on Ellis Island. Mike married Gassoumis’ mother in a church on the island that was across from their future son’s present house and took his wife back to the San Francisco Bay Area, where little Gassoumis grew up and later graduated in 1959 from the California College of Arts and Crafts in Oakland. Twenty years later, he joined the faculty as an instructor in color and composition.

Although Gassoumis sees himself as a painter, rather than an artist—“I like to paint; it’s about paint”—he found another way of making a living when he later moved to New York: silhouetted paper portraits of people. Two layers of paper are torn by hand in such a way as to create shadow and the illusion of depth and three-dimensionality. “The part that isn’t there is what makes the portrait,” he says of the shadow effect. “A perfect portrait with imperfect materials” is how he describes the process, noting that once he did a sitting with a whole family, including wife, dog and baby. “They all wanted to be in the nude,” he recalls.

Gigs like that allowed Gassoumis to succeed handily in a profession where survival is often dubious. The paintings at the last show were priced from 4,000 euros, or about $5,800, to 15,000 euros, or $21,900, but that seemed almost beside the point. Gassoumis clearly got the biggest charge out of talking to young art students. “I need to have the young people around me,” he says, referring to the energy of both students and the contemporary art scene.

His nonchalance about the selling side of the art world belies the precision of his work. Gassoumis is able to capture and convey a subtle mood expressed by a particular light at a certain time of day, all with a palette of only three colors. “I use Prussian blue, yellow ochre and Venetian red—and white,” he says, insisting it gives him more freedom. “I find that all the colors that I make have to be made up of those three colors and they harmonize. It’s so easy all of a sudden. You want this a little darker—you add a little Prussian blue or Venetian red. If you add [those two together], you make the most beautiful black, a rich black.”

And there is little doubt painting is his passion—even if he describes the process simply. “I like doing landscapes; I feel freer,” he says. “When you are outside and paint directly from nature, there’s no thinking involved. You start painting. That’s blue, that’s red.”