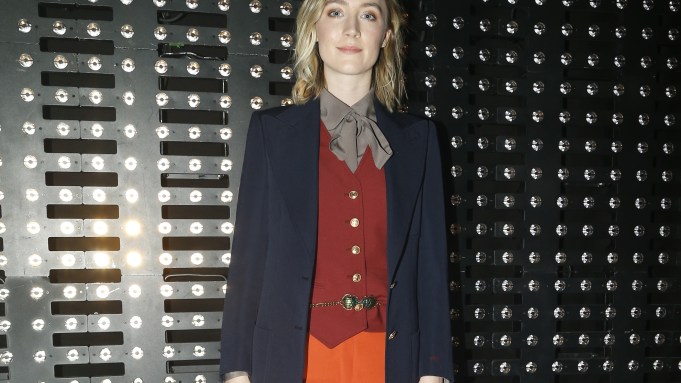 “This is the comfiest I have ever been at a show,” confessed Saoirse Ronan ahead of the Gucci show, wearing a sleek gray silk blouse under a red vest and blue jacket and over loose orange cuff pants. Ronan exchanged greetings with Salma Hayek Pinault, who complimented Ronan’s slim figure and was flanked by her husband François-Henri Pinault and their daughter Valentina. When photographers asked if it was possible to take an image of Valentina, Hayek Pinault said: “You have to ask her, if she is OK with it.” And OK she was, as she posed gamely with her parents.

Ronan just finished filming Greta Gerwig’s adaptation of “Little Women” to be released in December and will star in the upcoming Francis Lee film “Ammonite,” inspired by the life of paleontologist Mary Anning, and opposite Kate Winslet.

Other guests included Andrew Garfield, who said he was not doing interviews, flanked by Gia Coppola, who is directing him in the upcoming “Mainstream,” and longtime friend of the house Jared Leto.

After the show, meeting the press to discuss the collection, creative director Alessandro Michele also spoke of Karl Lagerfeld, remembering his early days at Fendi working with the designer. “I’ve loved him very much. He called me DJ, I had short blond hair and wore lots of chains — like today,” said Michele, pulling up his hands, statement rings on every finger. “We had loud music on when we worked and it felt like I was working with a 17-year-old kid. He was a huge example in life.”