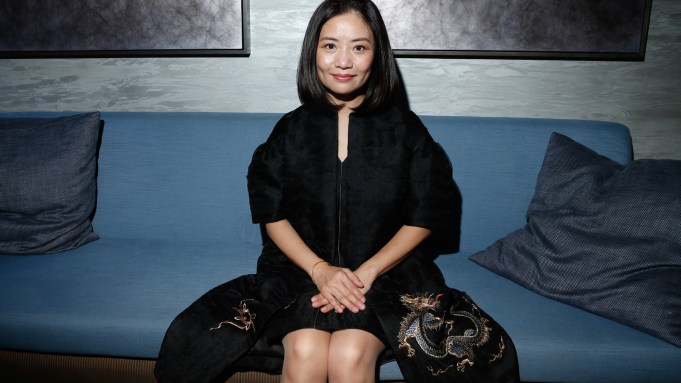 NEW YORK — Guo Pei’s engagement to Jack Tsao came down to one choice — a diamond ring or 50,000 yards of fabric. It’s no great shocker that she chose the latter.

Testimony to that at Monday morning’s Q&A with the designer was the regal embroidered yellow gown that Rihanna wore to last year’s Costume Institute Gala and which instantaneously introduced millions to the designer’s work. On view as a backdrop at the China Institute talk at the Waterfall Mansion, the event’s hostess Yue-Sai Kan told guests how the designer had once said, ‘My name is Guo Pei. In Chinese, the word ‘pei’ means to lose money.’”

Actress Zhang Ziyi and musician Zhang Yalun are a few of her better-known clients, and Yue-Sai Kan helped Americans first get to know her by inviting the designer to New York a few years before the Met. Seeing Napoleon Bonaporte’s war uniform at the Musée de l’Armée in Paris was a source of inspiration for Rihanna’s gown, which required 100 people working for 50,000 hours. (An unsolicited $700,000 offer for an elaborate Guo Pei gown featured in last year’s “China: Through the Looking Glass” exhibition at the Met’s Costume Institute was turned down.)

“If you choose fashion for the money, then fashion is not for you. You have to go through each stage to advance. The first 10 years for me was to learn, the second 10 years was to accumulate and the past 10 years was to create,” she said. “There are many designers like Karl Lagerfeld and Giorgio Armani who are most productive in their 80s.”

While her designs are often identified by their extravagance, the designer’s 19-year-old Rose Studio now employs 500 people in China. Committed to historical references and intricacy, the designer didn’t have an easy time finding embroiderers in Beijing after the Cultural Revolution. So she went to the countryside after hearing there were embroiderers that once catered to the royal family and spent an entire day going door-to-door before finding a family with embroidered fabric on their front door.

In business with her husband Jack Tsao, whom she described as her mentor, she discussed how China’s customers have changed, “Thirty years ago there was no such word as ‘fashion’ in China and 20 years ago there wasn’t any fashion design in China. But in that time, the understanding of beauty has evolved so much for Chinese people. They are now seeking the spirit of their nationality and their individuality, so handcraft jobs are now respected. During the old times, the ideology was you use your brain to work to make money and they looked down on people who used their hands to work. Now handwork is considered an expression of human emotion.”

With a 300-person embroidery team today, she said she was unaware of Europe’s wealth of embroiderers until she visited the continent for the first time in 2000. While those resources could have helped her to learn the technique considerably faster, she relishes how she built her team. Whenever she goes to work, she is conscientious of the fact that she has to do better to give her employees a better life.

Responding through a translator, the designer was so animated and enthusiastic that many in the crowd laughed along with her stories even though they could not understand what she was saying. Amid the futuristic mannequinlike Osang Gwon installation in the Upper East Side gallery, other Guo Pei designs were interspersed.

In New York to be honored at the Blue Cloud Gala on Tuesday night, the designer made headlines this summer when Apple’s chief executive officer Tim Cook visited her Beijing studio. After Monday’s talk, she said she hopes to collaborate with him, since they both “agreed that science, technology and beauty go hand-in-hand.”

Seven years after Guo designed costumes for a “Tosca” performance at the Word Opera Festival, she will handle costume design for a fictional legendary movie in China, “The Country of Women,” which starts filming next year. For her next haute couture show in Paris in January, she will collaborate with a set designer. With a base of U.S. personal clients that is growing, Guo would like to open a store here.

Asked why she gave up an “iron rice bowl,” a term for guaranteed job security, to pursue a fashion career in the Nineties, Guo said fashion design is an emotion in her heart so she just “powered through without thinking twice to establish an environment to create, regardless if it made money or not.”

During the first 10 years of her career, she designed ready-to-wear but was sometimes frustrated by how she saw women wearing her styles on the street. She decided she was better-suited for haute couture because she could sell directly to the customer and teach them how to wear her designs in the process. Unlike in Europe where haute couture is a sign of wealth, in China there is also the factor of contemplation and beauty, said Guo, the first Asian-born designer to have been invited to show by the Chambre Syndicale de la Couture.

Guo said, “Many in China believe if you’re acknowledged in the West, you are somebody. What I want to do is something that is a bridge and that is meaningful to the nation and the people.”