The British director brings his all-male theater group to New York in "The Merchant of Venice."

By Vanessa Lawrence on May 12, 2009
View Slideshow 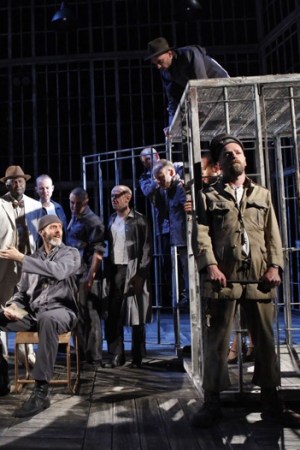 The Brits have a knack for churning out theatrical dynasties. And now through May 17 at the Brooklyn Academy of Music, another one is on display with director Edward Hall (son of Sir Peter, half-brother of actress Rebecca, recently at BAM herself in Sam Mendes’ Bridge Project) and his theater company Propeller’s production of “The Merchant of Venice.”

Founded in 1997, Propeller boasts an all-male cast of actors who perform exclusively Shakespearean works with modern aesthetics. In this rendition of “Merchant,” which has already made the rounds in England and Rome, the setting consists of metal jail cells, with the actors sporting prison garb instead of 16th-century finery.

“There’s an unbelievable mix of people in prisons, and I thought if we explored the story in that environment it might push us to more extreme explorations of how we stage the play,” explains Hall, 42. “In prison, people live in a very tense situation, where things could boil over in a second into intense violence. And the whole system runs on money and control, which felt like a good comparison to Venice.”

It is a juxtaposition in keeping with Propeller’s more-than-decadelong body of work. Hall first tested the idea of mixing traditional texts with modern techniques when he staged a production of “Henry V” in Watermill Theatre in 1997.

“I thought, I’ll mix some classical disciplines with some modern s–t. I’ll have an all-male company and I’ll take away some of the theater’s indoor technology,” says Hall, who eschews recorded music and elaborate set designs. “I wanted to create more of an event, and release some of the burlesque energy I think is inside these texts. It worked and we thought we’d do it again and I did it again and it went on from there really.”

Despite his upbringing, the stage wasn’t Hall’s lifelong ambition. In high school, he was captain of his soccer team and a member of a band and even at one point considered a career as a cricket player.

After a year at Leeds University, he transferred to the Mountview Academy of Theatre Arts, where he spent three years training as an actor and came round to directing. Since then, he has balanced his Propeller endeavors with contemporary fare, like a recent staging of a Richard Goodman play in Boston earlier this year. He is directing episodes of the BBC series “MI5.” And while the Hall legacy is not always an easy heritage to carry, he has found it more fortifying than not.

“For a second it’s worrying, but then you very quickly realize that you have no control over what people say about you. People will always say harsh stuff and you musn’t believe it; and people will say lovely things, which you also must not believe,” says Hall. “Keep your objectivity and keep focused on what you’re doing and why you’re doing it, really, and I think if you keep that close to heart then you can get through this business.”