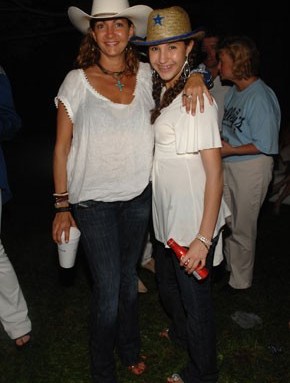 There are certain standard ornamentations one expects to find in the yard of a well-appointed Hamptons estate—blue hydrangea bushes, sparkling black-bottom pools, the occasional garden statue. Bucking bronco machines—not so much. But on Saturday night, Rita Schrager set one up on the lawn of her expansive Southampton manse for a “Denim and Diamonds”-themed bash celebrating Lara Shriftman and Elizabeth Harrison’s book “Party Confidential: New Etiquette for Fabulous Entertaining.”

“I didn’t really give it my best, but I still won’t be able to walk in the morning,” said a winded Sophia Schrager, who’s all of 13, as she climbed off the bull.

Other guests including Kelly Killoren Bensimon and CNN’s Alina Cho sipped on draft beer and nibbled on barbequed chicken and cornbread.

A handful of partygoers had headed to Schrager’s from Sagaponack, where NARSAD (the National Alliance for Research on Schizophrenia and Depression) held a “Celebration of the Arts” affair. There, a handful of “Law & Order” actors, including Gary Dourdan, who was recently arrested on charges of drug possession, performed a series of readings on madness, depression and mental illness by writers like Edgar Allen Poe and Sylvia Plath. Between material, Deborah Lippman warbled a jazzy version of Gnarls Barkley’s hit “Crazy” without any irony whatsoever.