At 16 years old, the modeling career of this Midwest native is through taxiing and ready for takeoff. 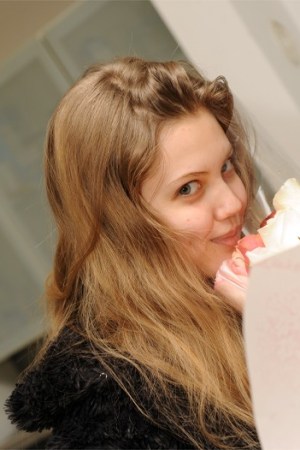 Traffic is too slow on 35th Street on a recent Saturday, so Lindsey Wixson, the 16-year-old model from Kansas, decides to ditch her cab at Madison Avenue and walk the last few blocks across town through the snow to Jason Wu’s studio.

A stranger seems to recognize her on the street. “Really?” she says gleefully. That never happens. She might want to get used to it.

The story of the 16-year-old from the Midwest who finds fame as a model has been done before, but the speed and degree of Wixson’s success breaks the mold. When she was 15, Steven Meisel found a video of her on a modeling Web site and booked her for Italian Vogue. When Meisel’s photographs ran, Prada booked her to open their spring show in Milan, and Miu Miu tapped her to close in Paris, both as exclusives. By September, Stefano Tonchi ran a full-page close-up of her lips and the gap in her teeth — her two most arresting features — in his first issue of W. She walked in a combined 44 shows in New York, Paris and Milan in the fall. John Galliano, Versace Vanitas, Miu Miu, Jill Stuart and Alexander McQueen have all booked her for campaigns.

This year promises to be bigger.

Backstage at the Oscar de la Renta runway show in the fall, a reporter for the blog Modelinia asked Wixson which designer she would like to wear to the prom. “Jason Wu,” she said. “Oh my god, my friends would be, like, how much did that cost? What? Like freaking out.”

Soon after, someone reached out to tell her that Wu would be happy to accommodate.

Now, five months later, she is sitting across a narrow table from the designer in the middle of his studio. Spare electronic music plays over speakers. Wu, wearing a blue sweater and jeans, says that after the blog item ran, people kept asking him if it was true, and that at least one other 16-year-old model was jealous.

“It will be my first prom dress,” Wu says. “I’ve done all the other occasions, but I’ve never done a prom dress before.”

Nick Bananto, Wixson’s 18-year-old boyfriend, sits at the end of the table watching quietly. It is his first time in New York. He flew in from Kansas to meet up with her when she got back after two weeks in Paris for the couture shows and China, where she walked for Prada. “You’re going to have the most glamorous prom dress, I promise,” says Wu. They brainstorm colors and a design.

“So, like, a bustier, and then a double-shoulder thing, and a blue, kind of flowy dress,” Wu says, summing up his vision. “I think that will be nice. Let’s do it.”

Wixson thanks him several times.

The designer turns to the boyfriend. “What are you going to wear?”

“Umm,” he says. He hadn’t thought about that. “A tux,” Wixson answers, saving him from awkwardness.

“You’re gonna have to dress up and match her, because she’s gonna be really dressed up,” Wu says. The couple laughs politely.

Wixson invites the designer to the prom before leaving. “You can come. You’re totally welcome,” she says.

“Cool,” says Wu. He says that he didn’t get to go to his own prom in high school and promises to show her the dress when she returns to town for fittings for New York Fashion Week. He escorts them to the door, and Wixson and Bananto say goodbye like polite teenagers from the Great Plains.

“It’s such an honor to be here,” Bananto says, shaking the designer’s hand.

When Wu closes the door to his studio behind them, Wixson takes a giant leaping skip toward the elevator and lands in a pose with one hip out to the side. She raises a celebratory fist in the air.

From Wu’s studio, the couple heads to catch the 2 train on 34th Street. Wixson is wearing a purple Anna Sui coat, a scarf covered in silver sequins, skinny black jeans and boots that she bought herself in Kansas. Bananto takes a long-exposure photograph of the train pulling into the station on his iPhone. He lives in Augusta, Kan., a suburb 20 minutes north of Wichita, and plays the guitar. He surprised her that morning with a dozen roses. The couple met in a doughnut shop. She made the first move.

“I don’t really think of myself as being 16,” Wixson had admitted earlier that morning, sitting on a gray sofa in her agent’s boyfriend’s apartment on East 3rd Street. Her right leg is crossed over her left, and she energetically bounces her dangling foot. “I think I’m in the middle of 17 and 22. I don’t feel 16 at all.”

The day before, she had done her first editorial work for Vogue, a two-model shoot with Coco Rocha.

“Everyone was really on top of everything. They have their own creative idea, and they all work together,” she says. “I think the most stressful shoots are when the crew doesn’t know what they’re doing and they’re unprepared.”

Cheri Bowen, her agent at the Marilyn Agency, says that Wixson was more interested in quality than quantity.

“She’s incredibly intelligent about the business. She’s not about selling out,” she says.

When Wixson was 12 years old, and 5-feet, 7-inches tall, in Wichita, strangers used to come up to her in stores like Dollar General and Sally’s Beauty Supplies to tell her she could be a model.

“It just became clear to me,” Wixson says.

Around the same time, she read an article in Reader’s Digest in the bathroom.

Now she is interested in acting or singing. She admires Miuccia Prada’s business acumen. Wixson is focused on her career and says she has skipped the chance to party with the fashion set.

“Real success is not, like, materialistic,” she goes on. “It’s being where you want to be when you want to be; just living your life how you feel; having an ultimate goal and being able to accomplish it.”

“For me right now,” she continues, “success will be getting a GED.”

Wixson is too cool for school, in a good way. She’s not arrogant, but she sticks up for herself. (“Correction: I have boobs and I do eat on a regular and healthy basis [smiley face]” she wrote on Twitter to nobody in particular in January.)

When she talks about her ambitions, she manages to come across as neither a delusional teenage girl nor an entitled young model. She doesn’t seem to be lost in her sudden fame and access, though she is certainly precocious. It’s hard to imagine any 16-year-old complimenting Arizona Muse, 22, Anna Wintour’s favorite model at the moment, for her “poise.”

Wixson would be a junior in high school now, but on her sister’s advice she decided to devote herself to modeling instead of trying to juggle high school as a jet-lagged teen.

“I usually need a teacher to give me examples, but I didn’t really get to have that when I was traveling,” she says.

She was in accelerated math in middle school and has always been an A-B student. She wants to get her high school equivalency so that nobody will be able to judge her for neglecting her education.

Getting to the prom without being in high school might be a challenge. “I’m actually being taken by my best friend Victoria,” she says.

Back home in Wichita, Wixson is a normal teen. She watches movies like “Zombieland” with her mom, Michele, a school-bus driver. Her dad, Thomas, works installing satellite dishes. Her sister, Kirsten, is engaged and plans to start a small farm in the lot next to her house in Wichita, raising chickens and growing vegetables and wild berries. Wixson got the gap in her teeth from her dad. They also share hand lotion sometimes.

“He comes home and has beat up fingers and stuff,” she says.

Her sister travels with her for work because her mom isn’t much of a traveler. “It’s a conflict of personalities, honestly,” she says. But she brags about her mom’s ability to shop at antique stores and thrift shops, and haggle. She found a set of wheels for Wixson’s 2003 Chrysler Sebring Convertible — a 16th birthday present to herself — for $100.

When Wixson was in the eighth grade, her math teacher told her to make a list of all the things she wanted to accomplish in 10 years. She wanted to be on “America’s Next Top Model” — scratch that — and live somewhere exotic. Wixson hasn’t gone back to look at the list, but she keeps adding to it. She’s said before that she wants to be a chef.

“When I went home for Christmas, I was in the kitchen for three days straight. Making fudge, making cookies. I made truffles,” she says, counting on her fingers. “I was just in there all day, and I didn’t even eat lunch, I was just in there cooking and cooking. I made spice bread.”

And she wants to learn to fly before she’s 18.

“One, it’s better than sitting back in the back and not being able to see the whole view,” she says. “And I think it would be cool to just be able to fly wherever. If anything, you know, went wrong with the world, I could just fly away.