Hannah Elless, star of Broadway's "Bright Star," on her Steve Martin films and her favorite bluegrass. 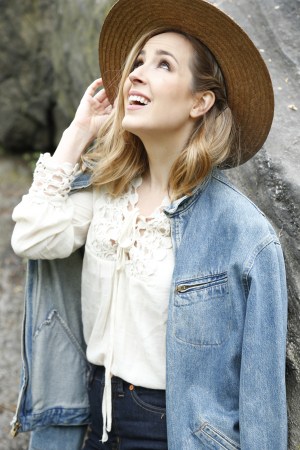 Hannah Elless, 29, is currently starring on Broadway in the Steve Martin-penned bluegrass musical “Bright Star,” which is set in the Blue Ridge Mountains in the Twenties and Forties. Here, the Michigan native talks vintage finds, her favorite bluegrass, and her most “New York” moment.

Favorite place to vintage shop in New York: If I have all the money to spend? New York Vintage or What Goes Around Comes Around. If I’m on a budget? The Buffalo Exchange in Chelsea. I just found a pair of Hermès heels there that I love.

Best vintage find: A pair of high-waisted, floor-length silk pants from the Thirties that were practically being given away at this tiny boutique. What’s the phrase? One (wo)man’s (leftover clothing) is another (girl’s) treasure.

Vintage piece you own with the best story: Definitely the Art-Deco style star necklace that my grandmother gave to me that she got from her grandmother. Think about how many wonderful parties and events that necklace has seen throughout history! I added to that history by wearing it to my first preview of “Bright Star” on Broadway in New York.

Last show you saw on Broadway: “The Humans,” which is playing right now at The Helen Hayes Theatre.

Favorite Steve Martin film: There are so many…but I’m going to get really nostalgic and say “Father of the Bride” because, c’mon!

Favorite place in Central Park: It changes by the season, so today I have to say the baseball fields at the 65th Street entrance. Every Thursday during the spring and summer you can watch Broadway shows play each other in softball games. It’s free and fun and completely insider knowledge. So, now you know.

Thing you miss most about Michigan: The west coast sunsets over Lake Michigan. Also, campfires.

Most “New York” moment: Riding the subway home with all the audience members who just saw my Broadway show! Does it get New York-ier than that?

Favorite bluegrass musicians: Alison Krauss. I grew up listening to her voice and singing her songs. Her sound is deliciously unique. And Chris Thile. I first fell in love with his talent/sound because of his band Nickel Creek and now I am a huge Punch Brothers fan.

Instrument you wish you could play: Cello. It has a gorgeous, otherworldly sound. It takes years to master an instrument like that. But hey, a girl can dream!