The movie is the German entry for the Best Foreign Language Film Academy Award and will open in New York and Los Angeles on Jan. 9. 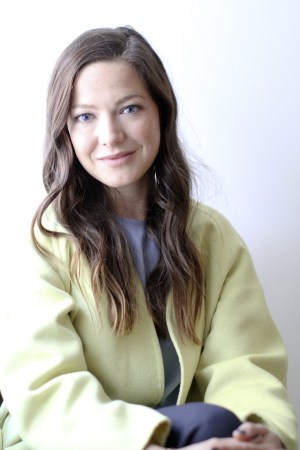 German actress Hannah Herzsprung’s latest role is as Caroline von Beulwitz in “Beloved Sisters,” directed by Dominik Graf and set in 1788. It’s a movie about two aristocratic sisters who are involved with the poet Friedrich Schiller, a story uncovered by producer Uschi Reich when researching another film about the writer. They take to heart the idea of sharing everything: the younger sister, Charlotte von Lengefeld, marries him, but von Beulwitz has his child. The movie is the German entry for the Best Foreign Language Film Academy Award and opens in New York and Los Angeles today.

Herzsprung’s father is the noted German actor Bernd Herzsprung, who was a handsome heartthrob as a young man. “He’s an actor, but he totally separated it from us, actually, with him being away,” she says. “We grew up in the countryside. My father was gone shooting a movie or appearing in the theater. I really found out what he was doing when people asked my mother to make a short movie in the house, and they stayed two months. I was 12. I looked at the young actress and asked, ‘What is she doing?’ I asked Papi, ‘Can you get me a part?’ and he said, ‘You have to go to school.’ ” Herzsprung, who is now 32 and looks like a young Romy Schneider, notes her father didn’t want her to go into acting because “he knew how hard the business is.”

However, the young girl went behind her parents’ backs to audition for a TV show, “Aus heiterem Himmel,” in 1997. “I did it all by myself,” she says. “You have to get your own way and experience if that’s what you really want. Finally, I did get great parts.

“When I started, nobody believed that I did it on my own,” she adds. She had, she says, “amazing, loving parents,” and, rather than talking shop, her father would only ask about any role she was playing, “ ‘Are they good to you?’

Her mother has appeared on a reality show, which her daughter says she did as a lark. Herzsprung is married to Henrik Siemers, the creative director of the Internet beauty site Glossybox.

“Beloved Sisters,” she says, “was a lot of work.” For one thing, the dialogue in the film is in High German, an archaic language that Schiller himself would have spoken, and Graf insisted that they learn to speak it fluently so that it sounded musical. Graf also wanted his cast to write with quill pens, which required classes in the technique. “Dominik is such a master craftsman, he creates an atmosphere within seconds,” the actress says. To play the role of an elder sibling, she says she “used everything that my older sister ever did to me.”

Still, Herzsprung says, “I’m just really happy I can pick my parts, and [that] they are seen.” She says she likes to go to theaters where her films are playing and watch them with an audience. “That’s where you get the real reactions,” she says.