"Scoop," the new Woody Allen movie, tells the story of a young woman who falls in love with a man who may or may not be a serial killer. 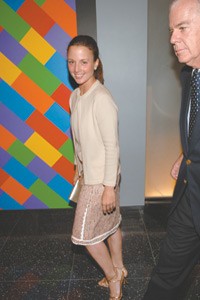 NEW YORK — “Scoop,” the new Woody Allen movie, tells the story of a young woman who falls in love with a man who may or may not be a serial killer. The larger question it raises is, “What if the person you’re meant to be with turns out to be a completely different person than the one they present themselves as?” Bebe Neuwirth, who attended the film’s screening at the Museum of Modern Art on Wednesday night, said she could relate. “When it happened to me, it wasn’t funny, though,” she said. Others who showed up and attended the after party at Le Cirque included the film’s star, Scarlett Johansson, as well as Emily Mortimer, Amy Sacco, Brian Williams, Bryant Gumbel, film directors Bennett Miller and James Toback, Elizabeth Saltzman and Amanda Brooks, whose own potential psychopath turned out to be the great guy she later married. “I thought my husband was trouble at first and he turned out to be a good one. I wrote him off and he won me back.” As for Johansson, she wasn’t taking any press. “She’s tired,” said one of her handlers, waving off a journalist. “This is unbelievable that there are reporters here.”

Whoever would have mistaken a movie premiere for a publicity opportunity?