Harley Viera-Newton, DJ Ross One Are Hosting a Weekly Dance Party From Their Living Room

The DJ and HVN designer shares her inspiration for "Homefriends Live From...Home" and the producer battle that everyone was watching earlier this week.

Harley Viera-Newton and her husband DJ Ross One were in their living room in Los Angeles working on a mixtape when they thought: why not invite their friends to join them?

The pair have predictably turned to music as an outlet while settling into quarantine. While they both have established solo DJ careers — Viera-Newton is a staple on the fashion party circuit — they’ve been making mixtapes of under the name Homefriends for a few years, and decided to use the downtime to work on a new mixtape.

“They’ve always been made up of our favorite classics: songs we grew up listening to, especially songs that spark nostalgia for us and never get old,” she says. “When we started to compile the songs for it as we usually do, we were really having a lot of fun jamming out listening to our favorite records in our living room, and it made us start to really miss our friends. And then as we started working on it more we thought, you know, why don’t we just live-stream this process of us sitting on our sofa listening to records, and essentially try and bring them into the room that way?”

They hosted their first Instagram live DJ set on March 28, and were blown away by the response as friends including Lily Aldridge, Kate Bosworth, Lauren Santo Domingo, Martha Hunt, Poppy Delevingne, Sarah Hoover and Jen Brill tuned in from their respective homes (or wherever they’ve chosen to self-isolate).

“We really love the way that everyone could interact in the Live; a lot of people in the chat, whether they were friends or strangers, were communicating and commenting on songs,” says Viera-Newton, who added that it was her first time doing an Instagram Live event.

“Seeing all your friends commenting in that room just fills a little bit of that void of seeing all your friends at a party,” she adds. “Obviously a virtual hang is never going to be able to compare with having a drink with your friends, giving them a hug, or more importantly watching people dancing and reacting to your sets and your music as you go. But we had a blast on the sofa, and we’ll take what we can get right now.”

The pair is planning to keep the party going, streaming a new set every Saturday. Genres span dance, R&B and hip-hop with artists from Talking Heads and ELO to Ja Rule and Mariah Carey. Or to put it another way: “A lot of the songs we’re playing make up the soundtrack to our best nights out in New York, and our best nights out with friends.” 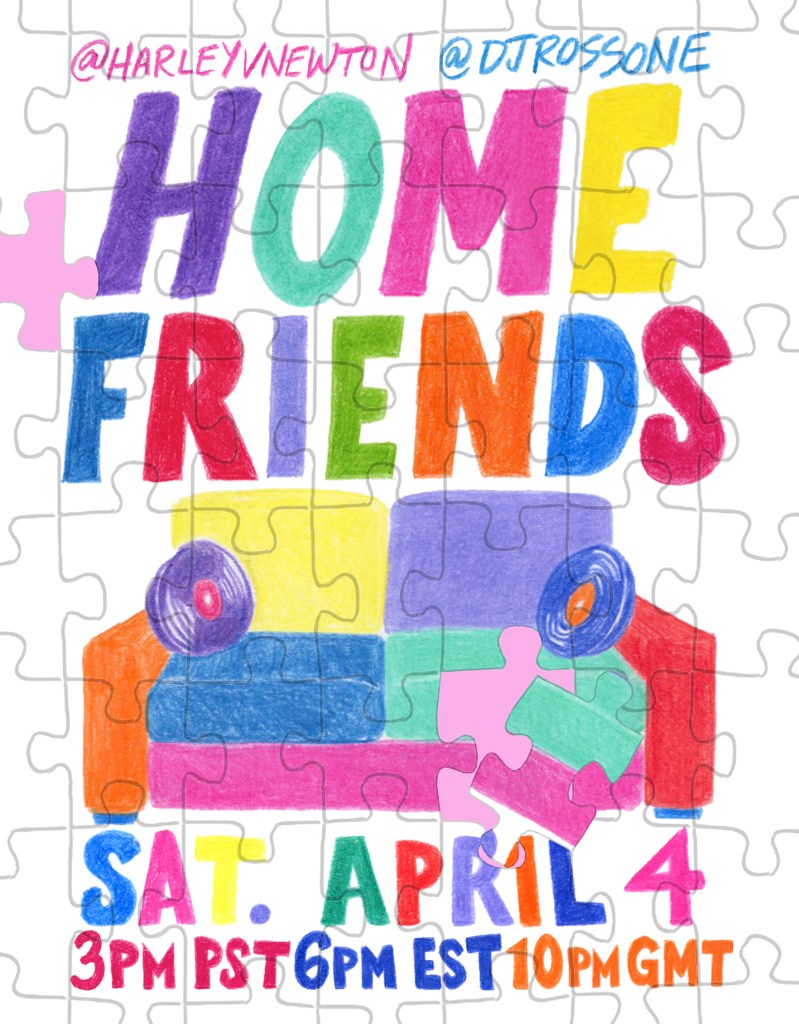 Invitation for Homefriends…Live From Home.  Courtesy

In addition to sharing playlists on Spotify, many music creators have recently turned to digital platforms in lieu of being able to convene in person. Bushwick club venue House of Yes has streamed its Saturday dance party with live DJs over Zoom, and the Shanghai Edition is teaming with promoter Eric Zho to stream DJ performances on the Huya game platform. Virtual clubs have also been popping up, including “online queer party” Club Q, which has attracted performers such as Charli XCX , Kim Petras and Tinashe for its Zoom events since mid-March. Lola Kirke started a weekly “virtual variety show” and has featured indie-creatives Lilah Larson and Zoë Kravitz. Other DJs, such as Diplo and Atrak, have taken their musical talents to the gaming streaming platform Twitch.

“Something that we found has been really fun and interesting is that a lot of DJs and producers have been doing these battles, where they go back-to-back,” says Viera-Newton. “An example of that is [on April 1] Scott Storch and Mannie Fresh had a producer off on Live; I think there were like 100,000 people in the room. It was really fun, Ross was screaming from the other room watching.” (Among the people in the “room” actively commenting throughout were Wiz Khalifa, T-Pain, Fat Joe, Jadakiss, Fabolous, Wale, Gabrielle Union-Wade, Solange and Victor Cruz.) Producers Swizz Beatz and Timbaland are behind the recent battle series; on April 4, a similar event took place with T-Pain and Lil Jon. Timbaland recently posted his “dream” battle: Kanye West vs. Pharrell. The Internet waits with bated breath.

“When I’ve been going through and listening to these live-streams, there was a void for that kind of Homefriends style set in what’s currently being offered, so that’s another reason why we thought we’d give it a go,” she says. It’s also giving her a reason to trade sweats for dresses from her own fashion brand, HVN. “At least I get to wear my designs once in the week,” she says, laughing.

“Honestly, that’s why Homefriends is such a great way to brighten my day, because obviously everyone’s going through such a tough time right now: every single person and business is affected by this. So to just take two hours out of my day to make a piña colada in my kitchen and listen to songs I love goes a long way,” she adds. “Music is always really healing, and there’s nothing better than having a dance. What better distraction?”